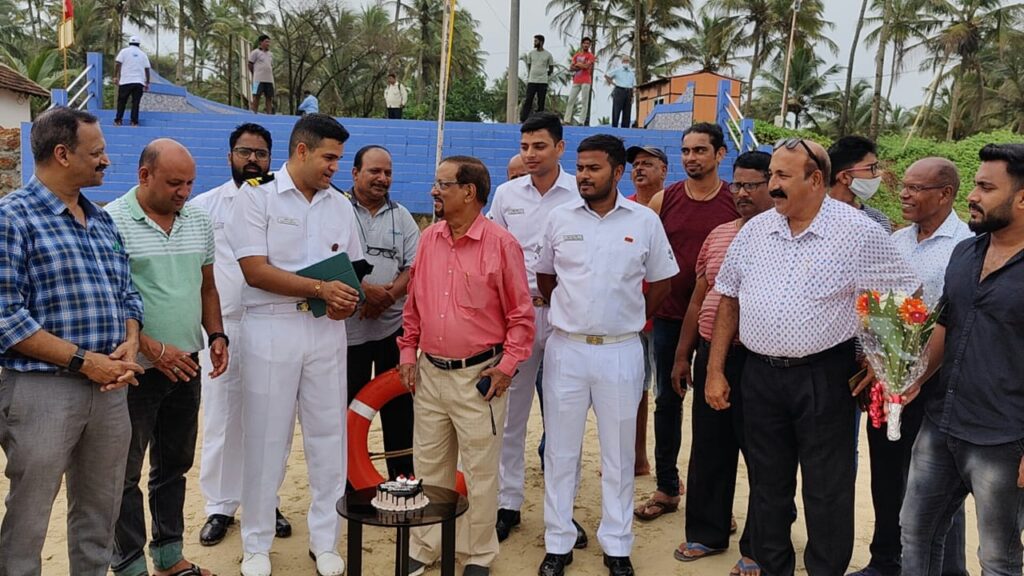 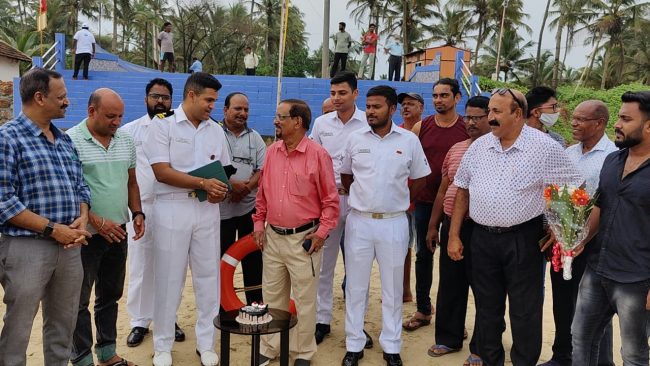 Goemkarponn desk
VELSAO: The Indian coast guard on Tuesday morning organised a community interaction with villagers at Velsao beach.
The coast guard organised many programs that included beach cleaning and patriotic programs along the beach as part of the Azadi Ka Amrit Mahotsav initiative in the participation of Velsao villagers led by Social worker Roquezinho D’Souza.
The coast guard later celebrated the 74th birthday of Roquezinho D’Souza in recognition of his efforts toward the village and support for various Coast Guard initiatives in the village
Speaking to reporters, Coast Guard official Sanidhya Vardhan said that Azadi ka Amrut Mahotsav was an initiative of the Government of India to celebrate and commemorate the 75th year of Glorious Indian independence the glorious history, culture and achievements.
“This Mahotsav is dedicated to the Indians who have not only been instrumental in bringing India this far in this evolutionary journey but also hold within them the power and potential to enable the PMs vision for make in India and Atmanirbhar Bharat. Indian Coast Guard’s responsibility lies in the safety and protection of artificial islands, providing continuous assistance and protection to fishermen stranded at sea, preservation and protection of the maritime environment including prevention of marine pollution,” said Vardhan.
“We have taken up this community interaction program to interact with the fishermen and hoist the national flag at Velsao beach, which is one of the cleanest beaches of South Goa. The interaction program is one of the charters of the Coast Guard to enable support to our anglers who venture into the sea for livelihood, and we will be with them whenever they are stranded, whether on sailing or off sailing. Our social worker Roquezinho D’Souza is always ready to help us from the beginning to support our event. We have been able to conduct many programs, including Yoga at Velsao beach, because of the support of Roquezinho D’Souza,” said Vardhan.
Social worker Roquezinho D’Souza said that the Coast Guard had got in touch with him to celebrate the program at Velsao
“I am glad many villagers participated in this program with the Coast Guard at Velsao beach. I will continue to support the Coast Guard, who have always been guiding and supporting the fishermen of the village. I am extremely grateful to the villagers and coast guard who have celebrated my 74th birthday celebrations. I am blessed to be surrounded by good people and villagers who continue to support me to help the society and bring development in my village,” said D’Souza.