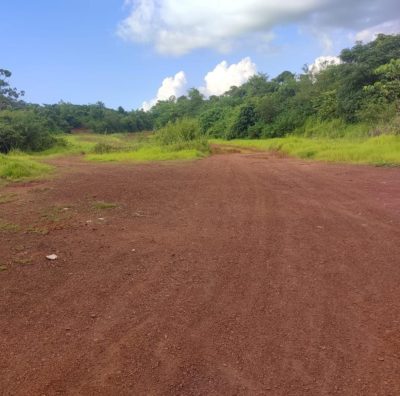 The BIG FAT SCAM..
117 plots of Sociedade land sold in Sanguem Uguem amounting to ₹800 cr
The possibility of bureaucrats and political leaders cannot be ruled out
Five self-appointed members of Sociedade are selling land to innocent people
Complaints have been made to Vigilance Department but no action has been initiated
Sociedade owns millions of square meters of land in the Sanguem area.
Sociedade organization was constituted during Portuguese rule under which the unused idle lands were leased out to people in respective areas for paddy cultivation.

Goemkarponn desk
SANGUEM: On Wednesday, Goemkarponn revealed how the government land in Uguem, Sanguem, has been sold to the government for a price of ₹60 lakh, but there are a bigger scam in the Sociedade of ₹800 cr.
The sale of plots has been made through media advertisements, and it is noteworthy that the scam has not come to the notice of any official from the Mamlatdar to the Deputy Collector.
Information reveals that this land transaction has been going on since 2007 and 2010.
The people who have purchased the lands have no idea about this scam.
According to documents available with Goemkarponn,
in all 117 plots have been sold. Interestingly, these plots have been sold at a much higher price than the market price.
Some of the people who had taken the land have already built houses.
Sociedade owns millions of square meters of land in the Sanguem area. Sociedade organization was constituted during Portuguese rule under which the unused idle lands were leased out to people in respective areas for paddy cultivation.
Portuguese left Goa, but this organization still exists. And since these institutions do not properly function, many people have encroached on them and started occupying those lands.
Though the land was given to the people of the area to cultivate, many have sold it.
Now, five self-appointed members of Sociedade are minting money selling the land.
There is all the evidence that they were never appointed. Currently, the five members of the committee are selling the lands themselves.
The so-called members of the Sociedade have no proof of their affiliation with the Sociedade organization. People now claim that their names are not included in the Portuguese bylaws and bulletins.
Activists and alert citizens say that the Sociedade land cannot be sold and, therefore, Rs 800 crore should be recovered from those who have scammed the land.
One complainant, Sushant Naik, has alleged that government officials and political leaders are also involved in the case, along with those who claim to be members of Sociedade.
The land was sold to two well-known mining companies and a stone crusher, as mentioned in the bulletins of January 1844 and 1929.
Sushant Naik has informed that the details of those accounts have been submitted to the Vigilance department.
“Billions of rupees have been lost. Chief Minister Dr Pramod Sawant has taken serious note of these complaints and demanded that the money of the scam be recovered from those bogus members,” he said.

Goemkarponn desk Porvorim: The four-day session of the Goa legislative Assembly begins tomorrow with the Opposition parties gearing up to corner the government on the ... Read More

DHS Goa to vaccinate citizens above 60 years, comorbid patients above 45 from March

Goemkaponn Desk PANAJI: Everyone above 60 years of age and those over 45 years with comorbidities will be able to get COVID-19 vaccine from March ... Read More