Goemkarponn desk
VALPOI: In Sattari taluka, about 50 percent of the children in the villages face internet connectivity issues and cannot attend online classes.
Many issues are emerging from different villages, but the authorities have failed to take any action in this regard.
There is simmering anger amongst the citizens on the issue as they say it is a total failure of the government to give proper connectivity.
Meanwhile, two days ago, the Central Committee of the MGP submitted a memorandum to the Deputy Collector of Sattari taluka and demanded that the government take measures to address the problems of children for online education in Sattari taluka.
Enquiries revealed that almost 50% of the villages in Sattari taluka do not have mobile connectivity.
The NGOs, parents, and other leaders have informed the officials and government several times, but there has been no positive response. 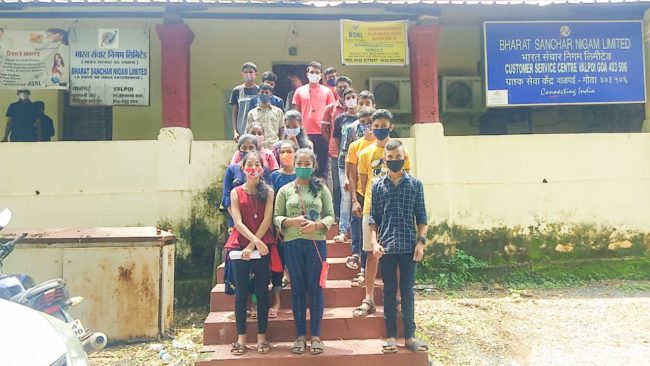 Now, teachers from different schools have started visiting students’ homes as they have been missing classes.
However, there is a stark difference between online education and the efforts of teachers to teach in every home by coming directly to the rural areas, as also it is time-consuming for teachers.
This can be of great benefit to children in rural areas through online education.
Fifteen days ago, a student was seen sitting in a dense forest in Sural village in the Thane panchayat area of ​​Sattari taluka, attending online education in a literally dangerous state.
For the last two years, the children have been taking huge risks sitting in a dense forest at a distance of about two km from the locality and in a place where network facilities are available.
Wherever they sit, there are wild animals.
A mobile tower has been set up at Sural. However, it has not been connected to electricity yet.
Health Minister Vishwajit Rane had promised that he would take this matter seriously, but it has not been fulfilled yet.
Recently, students from Satre, Derode, Kodal, and other areas staged a protest at valpoi BSNL office and demanded network facilities.
Meanwhile, two days ago, the MGP has submitted a special memorandum to the Deputy Collector of Sattari taluka demanding that mobile network facilities be made available in all rural areas of Sattari taluka.
There is also a demand for free smartphones for poor children, free internet in rural areas, and the training of teachers for online classes.
As these facilities are being neglected by the government, the Maharashtra Gomantak Party drew the government’s attention in this regard. Parents and students of Sattari taluka are currently asking whether the government will really wake up in the near future?