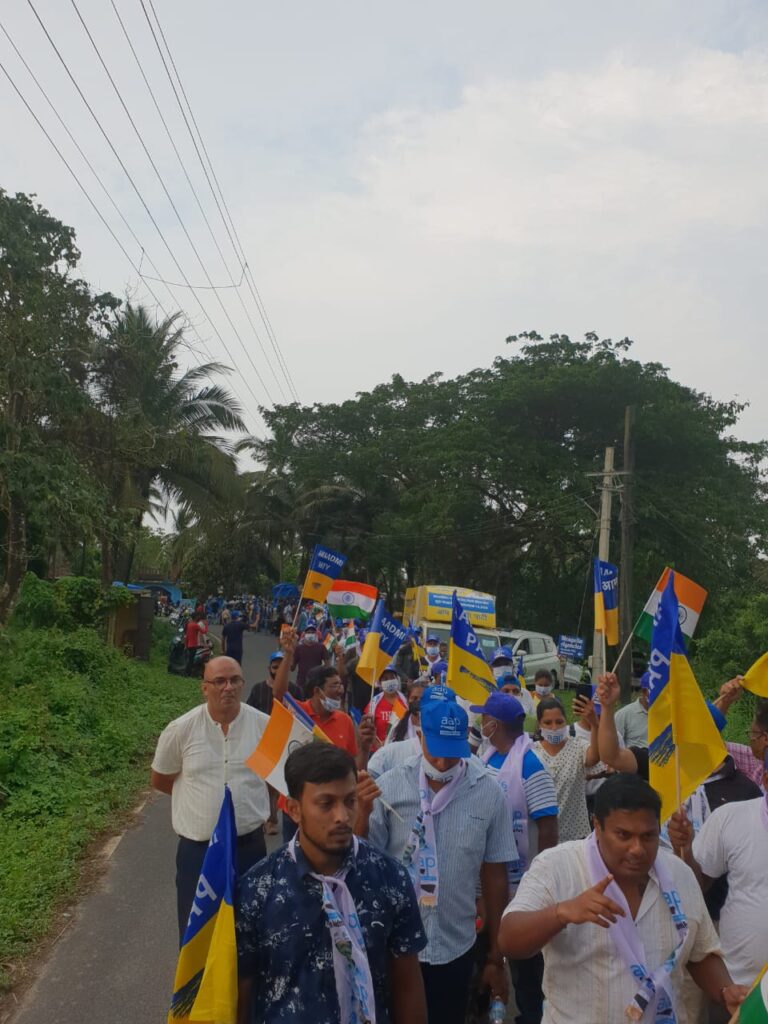 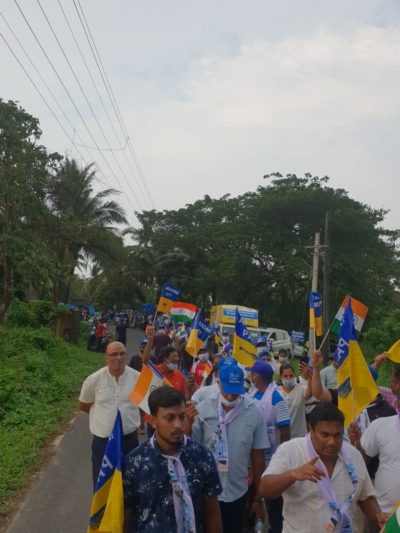 A scared and terrified Churchill Alemao today attempted to block AAP’s Rozgar Yatra in Benaulim. The Rozgar Yatra had just set off from Seraulim when the police arrived and stopped the rally. Unfazed by this attempt, AAP Benaulim Incharge and National Executive member Capt Venzy Viegas took out the rally on foot stating “BJP’s B team cannot stop us from fighting for Goan Youth”.

It is very obvious that Churchill Alemao is intimidated by how strong AAP has grown in Benaulim and in Goa. Earlier his son and nephew had attacked AAP volunteers and sitting ZP Hanzel Fernandes who were putting up banners for a debate on education. AAP has been growing aggressively in Alemao’s former stronghold. The Party boasts of it’s first ZP member from Benaulim Hanzel Fernandes & has been increasingly aggressive under the leadership of Capt Venzy Viegas.

The youth of Benaulim feel that they have been ignored by the Govt when it comes to jobs. Many families dependent on tourism have got no support from Govt when tourism dropped during lockdown. This has left many people in a very bad condition with no help. These families appreciate the INR 5000 support Arvind Kejriwal has announced for them and other families affected by the drop in tourism. On Gandhi Jayanti Capt Viegas organised a Career Guidance workshop for the Assemblies Youth who are looking forward to a Skill University just like Arvind Kejriwal has opened in Delhi.

Aam Aadmi Party’s Rozgar Yatra started on 8th October and has been going hassle free till the insecure former strongman of Benaulim tried to stop i. The Yatra has covered 14 constituencies so far with with AAP volunteers are taking Kejriwal’s Job Guarantee to the houses of every Goenkar. Everyday AAP is holding registrations across 75 booths and Yatras in 2 Assemblies across the state. On an AVG 5K people register for Arvind Kejriwals Job guarantee per day

Arvind Kejriwal in his visit last month to Goa had announced his guarantee of providing employment to every youth if the Aam Aadmi Party government is formed in the state. He said that every youth will be given employment after the formation of the AAP government and till the employment is not provided, one youth of every family will be given Rs 3,000 per month. He announced that 80 percent of jobs in the private sector will be reserved for the youth of Goa. Rs 5,000 would be provided monthly to families who lost employment due to shutdown of tourism and mining. AAP Government will further establish a Skill University in Goa on the lines of Delhi’s DSEU. He further said that AAP will bring an end to nepotism in government jobs in Goa and the jobs will be made available to the common man

AAP Goa’s Benaulim team has been aggressively working under the leadership of Capt Venzy Viegas to help residents out with many issues Captain Venzy Viegas has stood firmly by the residents by helping them during the CZMP movement, going door to door to provide residents with ration & even working with the large number of seafarers of Benaulim. Capt Viegas has also highlighted the pitiful conditions of schools and Aanganwadis in Benaulim.

“‘No B Team of BJP can stop us from raising unemployment issues of Goan youth” said Capt Venzy Viegas Benaulim Assembly incharge and National Executive Member AAP. “Every rally has gone without incident except this one, this proves that the sitting MLA Churchill Alemao is scared of AAP and has called his friends in the BJP to come out and help him stop AAP in Benaulim. But I want to tell him, we will not be scared and we will not stop. AAP will form the next Govt in Goa and AAP will provide employment to Benaulim’s youth” added Viegas