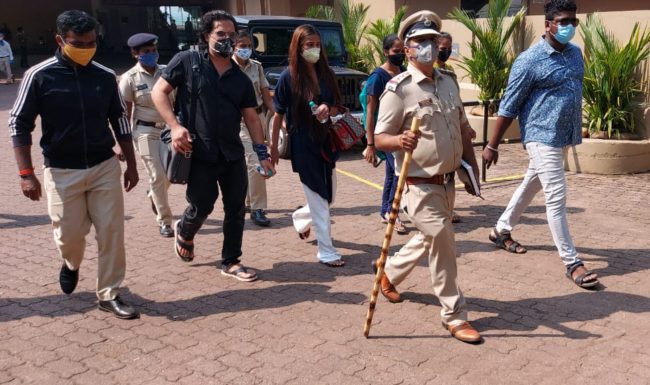 Canacona: Bollywood Actress Poonam Pandey has been arrested by the Goa Police from a starred resort in North Goa.
Calangute Police Inspector Nolasco Raposo told Goemkarponn.com that the actress was arrested from a resort in Sinquerim.
The actress was arrested in a joint operation by Canacona police and the Calangute police, he said.
He said Poonam Pandey’s husband has also been arrested by the police.
Following demands from the locals the Goa police have suspended Canacona PI Tukaram Chavan and two constables attached to Canacona Police station in connection with obscene video shoot by Poonam Pandey on Chapoli dam in Canacona.
It is alleged that Canacona PI gave police protection to the actress during the shoot.
Water resource Dept also suspended two security guards posted at the dam in the same case.
However, people of Canacona are demanding action against the senior officers of WRD in-charge of Chapoli dam for allegedly helping the shoot of this controversial video.
It is alleged that the parts of dam was painted specially for the purpose of this video shoot.
Earlier in the day, agitation under the banner of Jagruth Canaconkars withdrew their agitation after Chief Minister Dr Pramod Sawant informed the agitating crowd over phone that Canacona PI and two policeman who stood in guard at the Chapolim Dam while shooting for the porn film are suspended.