Another truck overturns at Borim Circle 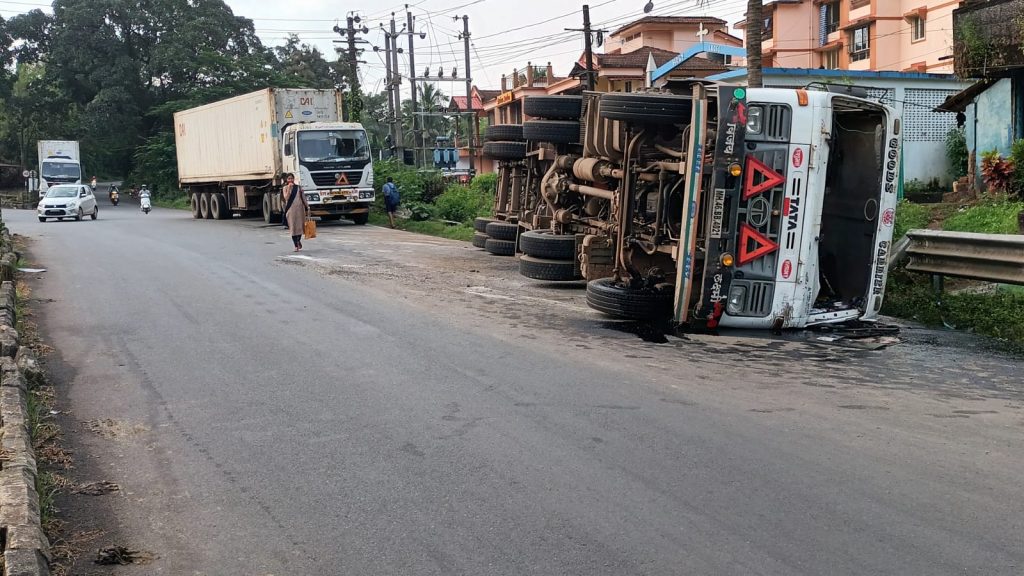 Goemkarponn desk
PONDA: Today morning truck overturned while negotiating Borim circle, and the driver escaped with minor injuries.
It’s not the first time, and earlier on several occasions, such accidents occurred, especially in heavily loaded vehicles.
Some three years ago, three electricity linemen were killed at Borim Circle. These memories were recalled by Borim locals today at the same spot while negotiating Borim circle; a truck moving towards Ponda from Margao was overturned, and luckily drivers who escaped with injuries were shifted to Ponda Sub District Hospital.
The locals, including panch member Sunil Borkar, said this is a black spot, and several accidents had occurred wherein heavy vehicles often fall while negotiating Borim circles.
The Borim Panchayat had passed several resolutions to reduce the size of Borim circle and sent them to authorities, but they fell on deaf ears.
Another citizen said the vehicles coming from Margao road and Savordem Shiroda road negotiate the circle, often leading to confusion. The primary demand of villagers was to reduce the size of the circle; however, he regretted that government failed to fulfil this demand despite several accidents.
The place is a busy junction and often movement of people and pedestrians and needs proper safety measures.
The PWD officials said they have already inspected and reduced the size of the small island near Circle to widen the road. He said it’s not possible to reduce the size of Borim Circle. If we minimise the size of the Borim circle, the vehicles from Margao would come in speed and lead to more accidents.
He said since the road is on a slope, the vehicles should drive slowly to prevent accidents.