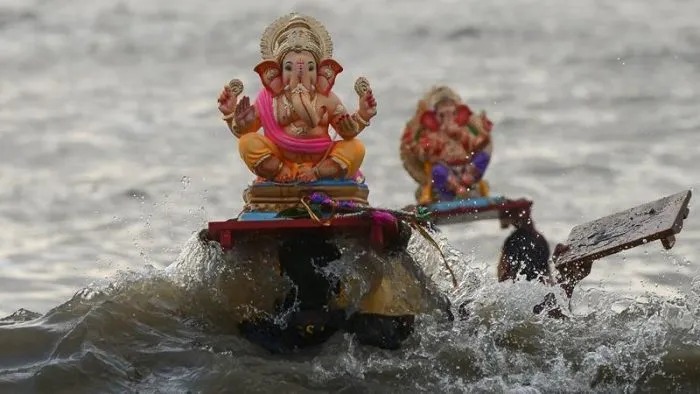 VASCO: Following rough seas and choppy waters, which could be life-threatening, the Bogmalo panchayat has appealed to people not to venture deep into Bogmalo Beach during Visarjan and also appealed to Drishti Marine for additional life guard staff during visarjan.
Bogmalo Sarpanch Sankalp Mahale said that there are around 300 Ganesh idols for immersion at the beach every year, and it is confusing and difficult to keep a tab on every group.
“The panchayat had a meeting regarding the Visarjan activity, and it was discussed that around 30 to 35 families celebrate Ganesh, but the beach witnesses as many as 250 to 300 Ganesh immersions coming from different areas,” he said.
The panchayat has informed the villagers about the necessary precautions to be taken during immersion and also appealed to them to use items from the Swayampurna Chaturthi Bazaar.
“We request all the people from the village and outside the village to take necessary precautions during immersion, and also co-operate with the lifeguards who will be present to assist them,” said Mahale.
He also urged the people to use fewer fireworks to help cut air and noise pollution and dispose of single-use plastics in the dust bins at regular intervals along the beach.
“We also request the Drishti to give us additional staff only during visarjan days to handle the Ganesh immersions that can go up to 300 numbers because as of now we have only 3 to 4 lifeguard staff that may not be sufficient,” said Mahale
Bogmalo Dy Sarpanch Lorena Da Cunha said that the panchayat had already taken steps to clean the beach area before the Ganesh Chaturthi festival.
“We have also had a meeting with the Electricity department to ensure that the area is well lit, and we have also repaired our high mast lamp repaired on priority using the help of the Electricity staff all the way from Mapusa,” said Da Cunha.
Panch Arun Naik said that outsiders must not go to the rocky area on the beach’s one end, which is very dangerous during Visarjan.
“The locals are aware of the details of the entire beach area, but outsiders might not know which are the dangerous points on the beach. We will block the side of the road leading to the rocky area, and we urge the people to carry the visarjan in the area near Joets restaurant. We will also try and keep some locals and lifeguards to control and divert the people to this side of the beach for Visarjan,” said Naik.