CANACONA: BJP hands over one of two houses which CM laid foundation in April month 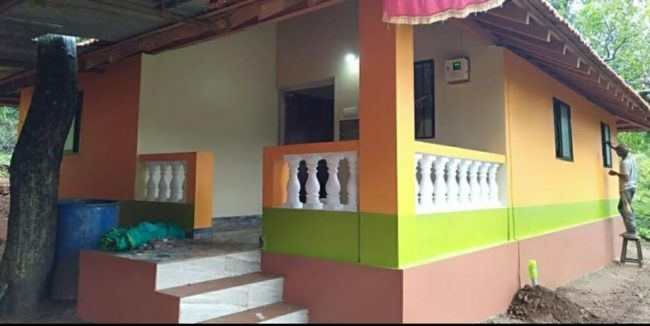 CANACONA: Canacona BJP handed over the keys of a house built under the party’s ambitious ‘Shram -Seva Dham’ project to a family of Khotigao village.

BJP Canacona had taken up to construct two houses in Canacona (the other at Ziltawadi Gaondongrim) of two different families having no proper roof to which foundation was laid to both houses at the hands of Chief Minister Dr Pramod Sawant in the second week of April, at thier own contribution of funds.

According to sources, party Karyakarta’s took on themselves to construct the house, as contribution initiated during Chief Minister’s April visit were further enhanced and according to sources around 4 Lakhs of cash was collected besides many others making contributions in kind and materials. Many of the Karyakarta’s themselves worked in different capacities and the house is constructed valued approximately around 12 Lakhs of rupees.

Incidentally, the shanty type of houses of Kamlakar Gaonkar not even had mud Walls and was covered with plastic sheets overhead, when the chief minister Sawant visited the household in April month.

BJP Canacona has also undertaken to construct a house of late Somnath Mirashi of Ziltawadi Gaondongrim, and recently identified a third one at Ordhofond for which work will also commence shortly.

One event of the G-20 Summit likely to be held in Goa to boost the tourism industry: CM

Goemkarponn Desk PANAJI: Chief Minister Pramod Sawant today said that at least one event of the G-20 Summit is likely to be held in the ... Read More

CM should sack Filip Neri if he means what he says: GPCC president

Rainfall/thundershower activity across the state till March 26: IMD