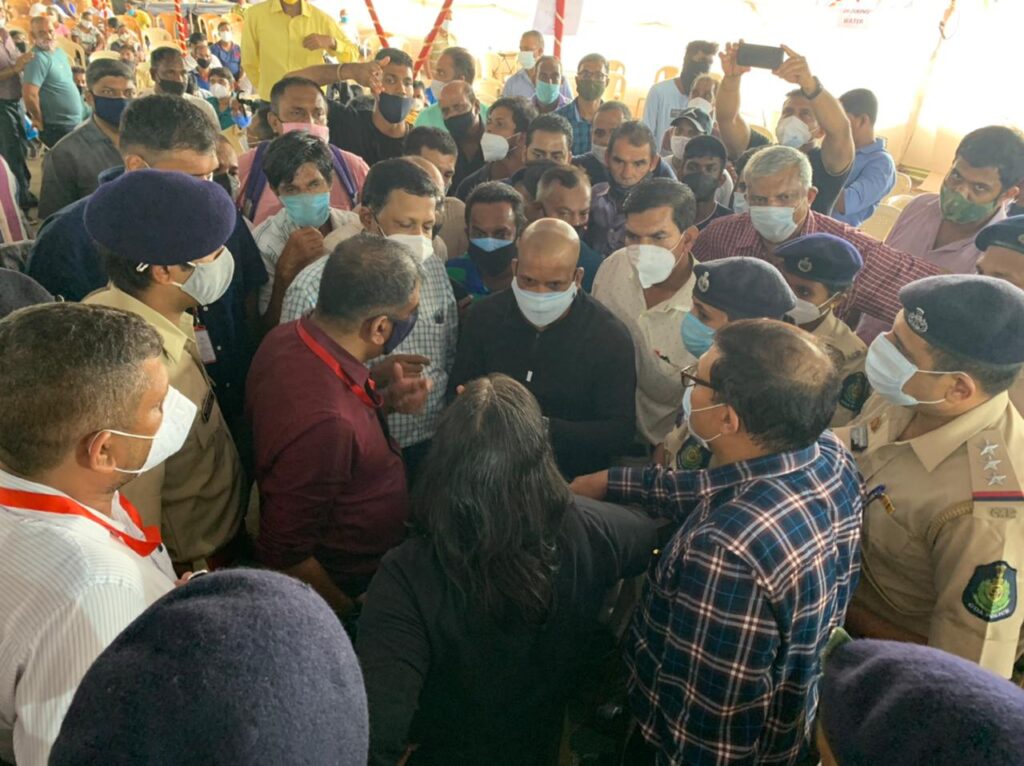 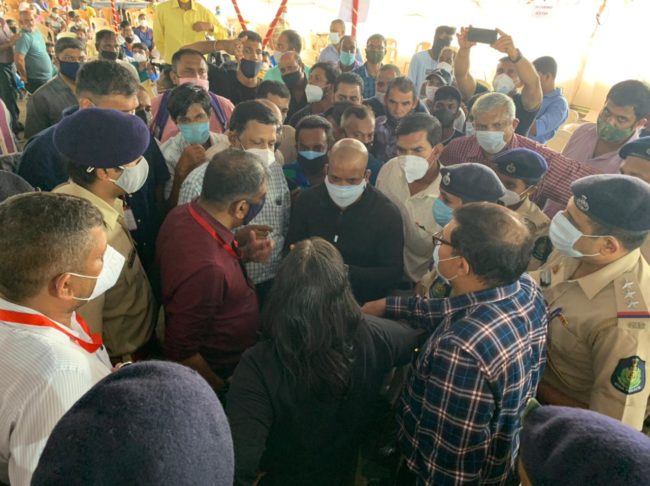 Speakers ask, when did NCSCM experts visit our villages?
Villagers rejecting erroneous CZMP
Speakers cause ruckus demanding live screening of the hearing at the venue
In Margao, the commotion over 15-minutes time limit for speakers

Goemkarponn Desk
PANAJI: The much-awaited and delayed public hearing on the draft Coastal Zone Management Plan commenced at Campal Parade ground today morning on a peaceful note, initially, but turned noisy at a later stage, with stakeholders raising their concern towards the draft plan.
As many as 96 speakers were registered for the hearing in North Goa, while the District Collector had also permitted spot registration for those wanting to raise their views during the hearing.
Each speaker was allotted 15 minutes.
At the start of the hearing, Collector North Ajit Roy informed that he would give all the suggestions and objections raised by the public due importance and consideration for incorporation in the final plan.
He, however, restricted speakers from making any political speeches.
Several hundred aggrieved citizens had participated in the hearing, which went on without any break, with participants expressing complete displeasure at how the hearing was being conducted.
There was a lack of food and water facility at the venue, and the hearing continued without any break.
Huge police force was deployed at the venues to control any untoward incident.
Some of the common objections raised by the Speakers were related to the demarcation of HTL, Eco-sensitive zones, fishing village and fish breeding areas, inaccurate markings of khazan lands, etc.
Speakers also pointed out that the CZMP maps don’t have information on critical features unique to Goa, such as salt pans, bird sanctuaries, sluice gates, shellfish areas, etc.
The citizens pointed out that the Chennai-based National Center for Sustainable Coastal Management (NCSCM) experts, who drafted the plan, never visited their villages to know the ground reality. Hence, the draft maps are erroneous.
Villagers say the draft CZMP has been done using satellite images and Google maps, wherein the draft plans are not people-friendly but are more corporate-friendly. Say anti-people plans are being forced on the people.
Everything went on fine until AAP leader Cecilia Rodriguez and Goa Revolutionary chief Manoj Parab caused a ruckus demanding live screening of the hearing at the venue.
The hearing had to be suspended for some time to bring the situation under control. It resumed after a small gap.
Participants also asked the authorities to call the speakers in a staggered manner in batches to ensure that they were not waiting for hours in the end for their turn to come.
At SGPDA grounds, Margao, a large number of people gathered at the venue for CZMP hearing and nearly 700 to 800 police persons deployed.
Every speaker was given 15 minutes to make a presentation.
Speakers said that Regional plan has not shown in the CZMP.
“The GCZMA has not collected data from different aligned departments like fisheries, pollution control board etc Law says that CZMP should be in consultation with locals and the locals have not been taken into confidence,” Speakers said.
The speakers said that the plan is passed to help coal transportation
Many citizens also questioned when Section 144 in place what is the need of taking the hearing.
Benaulim MLA Churchill Alemao raised many questions and objections.
Churchill said, “I am not satisfied with the plan presented by authorities. There is no clarity on port limits. Many houses of fishermen are not shown on the plan, which is very much objectionable.”
It may be noted that the National Green Tribunal has directed the State to complete the entire exercise by August 31. It has declined to grant any further extension for the completion of the process.
The draft CZMP was kept open for public suggestions and comments twice – first in January and again in June.
Close to 5000 objections and suggestions were received from the citizens and NGOs.
In advertisements issued here on Wednesday, the GCZMA said it has decided to remove the port limits from the final CZMP maps.
“The objections and suggestions have been received by GCZMA those pertaining to khazan lands bunds and sluice gates will be referred to WRD and the ones related to fishing wards, fishing zone and fish breeding areas will be directed to Fisheries department for enquiry,” the GCZMA said.
It further said that the 100 meters line is drawn along the coast to allow traditional communities to construct dwelling units between 100 to 200 meters, subject to a comprehensive plan that is otherwise an NDZ.
On whether the development will not be permitted if the land is between the HTL and the hazard line, GCZMA said, “a hazard line is a tool for disaster management & not a regulatory line.”
On queries raised by activists about why some structures are depicted on draft CZMP, and some are not, the GCZMA says, “no structures will be shown on the final CZMP map. All structures will be removed.”
It also said that mangroves that come in khazan lands would not be shown in buffer areas.
On issue related to how the depiction of khazan lands, sluice gates, & bunds on the draft CZMP map will be dealt with. GCZMA says, “issues related to the depiction of khazan lands, sluice gates, and bunds will be forwarded to the WRD, for comments and ground-truthing, wherever required.”