CM has now certified HM as corrupt and liar: Chodankar 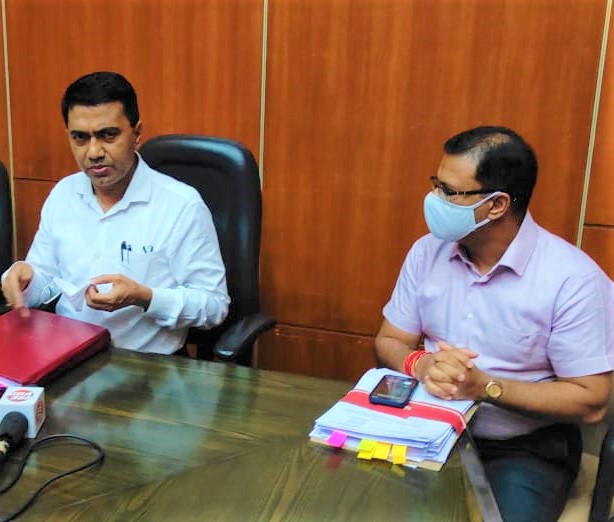 Goemkarponn desk
PANAJI:
GPCC President Girish Chodankar has charged that the BJP Government in Goa has completely lost its mental as well as administrative control. After getting 21 Certificates of Corruption from Goa Lokayukta, the defectice Chief Minister Dr. Pramod Sawant has now certified his own Health Minister Vishwajit Rane as ‘Corrupt & Liar’.
“The process of Self Certification for Corruption, Insensitivity, Irresponsibility, Failure has begun in BJP Government. Chief Minister Dr. Pramod Sawant’s denial of placing any order for procurement of Ivermectin Tablets for Prophylaxis Treatment of Covid is proving his own Health Minister Vishwajit Rane as corrupt and liar,” stated Girish Chodankar.
“We are very confident that in next eight months the Chief Minister will give similar certificates to rest of his ten ministers and finally get himself Certified as Corrupt, Defective and Insensitive Chief Minister Goa ever had,” claimed Girish Chodankar.
He said the Health Minister Vishwajit Rane had posted a tweet from his official verified twitter handle on 10th May 2021 as “With the support of the Hon’ble CM @DrPramodSawant, the Government of Goa will be starting the Prophylaxis treatment for those above 18 years of age. I have given instructions for immediate implementation of the treatment.”
Chodankar said the again tweeted on 17th May 2021 as “We shall be distributing Ivermectin tablets in the state of Goa in the next 48 hours in association with our WCD department & Anganwadi workers. Our Anganwadi workers will be distributing the same in households”.
He stated that the statement of the Chief Minister almost after a month denying the purchase of the said Ivermectin Tablets for Prophylaxis Treatment gives clear indication that none of his Cabinet Ministers are trustworthy and the Chief Minister desires that the people should not believe in them at all. We want Chief Minister to instruct all his Ministers not to make any public annoucements in future as the same lack trust.
“We once again demand that Chief Minister Dr. Pramod Sawant must make public the names of all those experts from India as well as abroad who advised his Health Minister to start giving Ivermectin tablets for prohylaxis treatment on Covid. We reiterate our stand that there is a scam of Rs.22.50 crores in purchase of the said tablets and demand a high level inquiry of the same,” Girish Chodankar said.
Chodankar reminded the Health Minister on his series of tweets in reply to my tweet raising alarm on Ivermectin tablets worth Rs.22.50 crores going missing after Congress Party exposed the scam. In one of his tweet,
“Vishwajit Rane had taunted me as “Teacher” having narrow knowledge. I humbly admit that as a Teacher as well as a Politician, I have always adopted the path of honesty, sincerity, integrity and loyalty and i am completely lacking in art of chicanery like Vishwajit Rane,” said Girish Chodankar.
“Health Minister Vishwajit Rane who had also questioned in those tweets about my and Congress Party’s contribution to the State must have realised now that our small contribution in this deadly pandemic is of saving the People of Goa being used as Guinea Pigs endangering their precious lives by taking Ivermectin Tablets without Clinical Trials just to facilitate “Business of Sickness” of BJP Government and “Mission Commission” of Health Minister,” stated Girish Chodankar.