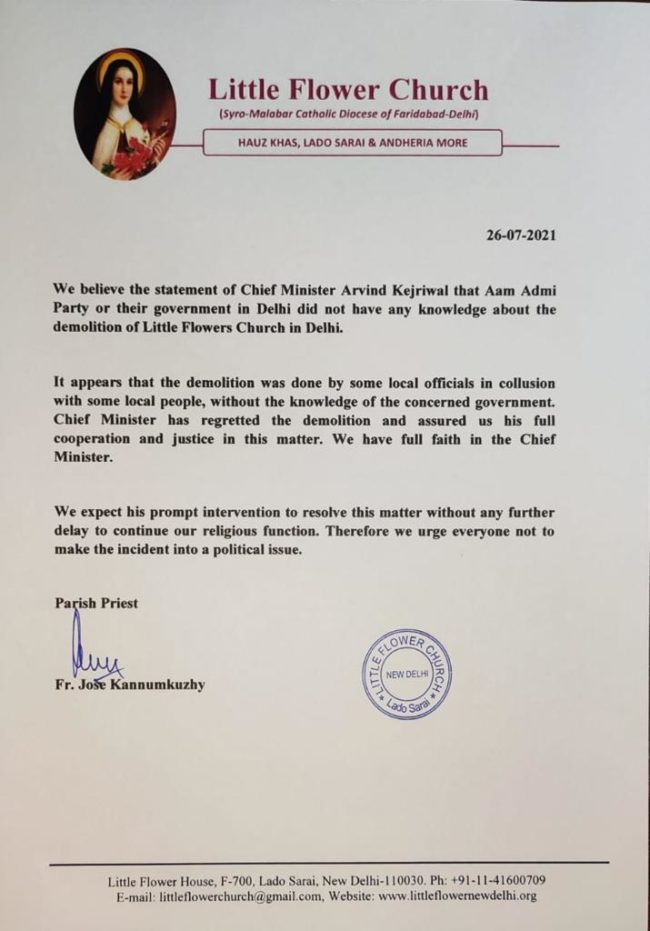 Goemkarponn desk
PANAJI: The Little Flower Church in Delhi released a statement that put to rest the communal politics that the BJP, Congress and Churchill Alemao have been indulging in for the past two weeks.
The church stated that they believed the statement of Delhi Chief Minister Arvind Kejriwal and were confident he would bring justice. They also stated that the demolition was done at the behest of the BJP run DDA without knowing the Delhi Govt. This clearly puts the blame on the BJP run DDA for the demolition and raises the question of why the Congress and Alemao were so enthusiastically shielding BJP from blame.
The full text of the church letter is as below.
“We believe the statement of Chief Minister Arvind Kejriwal that Aam Aadmi Party or their Government in Delhi did not have any knowledge about the demolition of Little Flower Church in Delhi,” said Parish Priest Fr Jose Kannumkuzhy.
The statement further said that it appears the demolition was done by some local officials in collusion with some local people, without the knowledge of the concerned Government.
“Chief Minister has regretted the demolition and assured us his full cooperation and justice in this matter. We have full faith in the Chief Minister. We expect his prompt intervention to resolve this matter without further delay to continue our religious function. Therefore we urge everyone to not make the incident a political issue,” the statement read.
AAP Leader Captain Venzy Viegas also released a statement asking, “Why was Churchill Alemao in Delhi? Who gave him the clearance to visit a site that has been under police guard? Who’s a connection in BJP did you use Churchill? The Delhi Police is directly under Amit Shah in Delhi, yet you got clearance?  Is this part of his deal with Amit Shah since he got charge-sheeted in the Louis Berger cases? All of Goa needs to know this answer! Both he and Leader of Opposition Digambar Kamat have been charge-sheeted, is this their service to BJP to save themselves?”
“This is an attempt by the Congress and Alemao to polarise and divide Goans. This letter exposes their lies. Arvind Kejriwal will provide justice to Little Flower Church!” said Capt Venzy Viegas.