*citizens to adhere to COVID-19 protocols including social distancing and wearing of masks and avoid unnecessary gatherings, especially close-door events 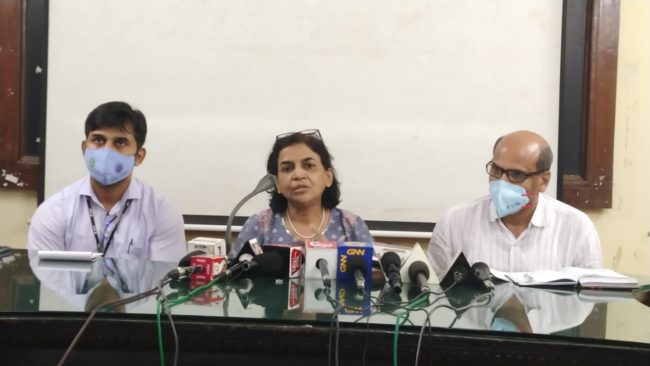 PANAJI: The Directorate of Health Services (DHS) today announced that Goa is hit by a third wave of COVID-19 from December 28, as the State witnessed a sustained rise in the coronavirus cases.

In a press conference held today, DHS director Dr Ira Almeida confirmed that there has been a sustained rise in COVID cases in the previous week and doubling of cases prior to December 28. “Based on this, we have actually designated the start of the third wave from December 28,” she said.

Almeida said that authorities are working to flatten the curve and they have geared up to tackle all the emergencies.

She has advised citizens to adhere to COVID-19 protocols including social distancing and wearing of masks and avoid unnecessary gatherings, especially close-door events.

Almeida said that each and every patient visiting the government hospital will be tested for COVID-19. She said that the testing will be increased and the aim is to test 3,000 above people every day for now.

State Immunization Officer Dr Rajendra Borkar said that 95 per cent of the State population is fully vaccinated and has got immunity and hence there is no need to panic. He also said that from Monday, around 20 per cent of students in the age group of 15-18 years are administered with first dose.

Furthermore, colleges in the coastal State would also remain shut till January 26 while all physical sessions have been stopped for classes 8 and 9 in schools from Tuesday onwards till January 26, informed Shekhar Salkar, a member of the State Task Force on COVID-19.

At the same time, authorities said that though the number of COVID-19 cases in the State had surged drastically since December 25 last year, the deaths and hospitalisation rate were low.

Meanwhile, 66 passengers have tested positive out of the 2,000 samples tested from Cordelia cruise ship. The ship had come from Mumbai and is presently docked at the Mormugao cruise terminal.

NOTE give thumbs up to NGT’s decision of disposal of cigarette, bidi butts

Porvorim: After exposing the government on the floor of the House on Mopa scam, Porvorim MLA Rohan Khaunte has said he would take legal recourse ... Read More