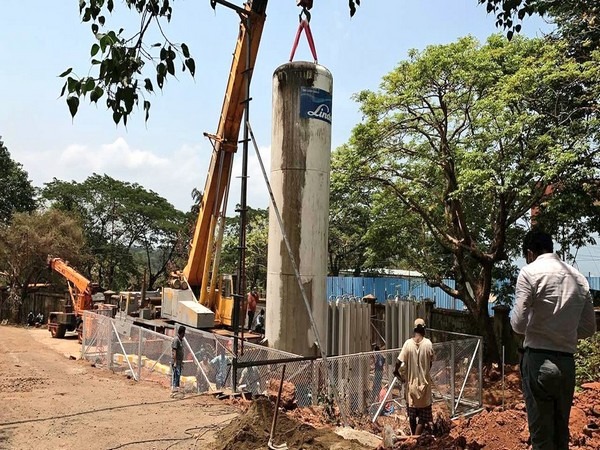 Goemkarponn desk
PANAJI: It’s been a fortnight now since Chief Minister Dr Pramod Sawant announced the appointment of a committee to inquire into the oxygen supply issues at the state-run hospital and suggest mitigation measures.
In this 15 days, neither the deaths have come down nor the report has been submitted by the three member committee.
Following nearly death of nearly 60 covid patients in Goa Medical College and Hospital (GMC) owing to oxygen supply, from May 10 to 13, the State Government appointed a three-member Committee to
inquire into the oxygen supply issues at the state-run hospital.
Director IIT Dr BK Mishra headed Committee has former GMC Dean Dr VN Jindal and Secretary Urban Development Tariq Thomas as its members.
The committee was been set up also after High Court slammed the government and the GMC over inadequate oxygen supply resulting into deaths of the patients, especially in the wee hours of the day.
The Committee has to ascertain adequacy of the oxygen supply to GMC as well efficiency of the oxygen supply chain.
The Committee will also had to examine the process of administration of oxygen at GMC, and give recommendation for its improvement,
“Committee to recommend improvement in the complete chain of oxygen delivery at GMC,” the order said.
The Committee, as per the order, was directed to finish the task within three days and submit the report to the government.

No data from GMC?
Information reveals that the committee is yet to submit the report till date.
As per the government sources, the Goa Medical College officials, against whom the probe is have delayed supplying of data to the three member committee.
“The committee received the data itself after a week from GMC,” sources said.
When Goemkarponn contacted Dr VN Jindal, a member of the committee for his comments, he only said, “it is not yet ready.”
He added, “The report is being prepared by Secretary (Revenue), you may contact him.”
Asked whether the GMC delayed the submission of data, he replied, “you please speak to the chairman.”

Political angle?
Sources in the political circle also informed that the Chief Minister Dr Pramod Sawant announced probe when things were not all that well b 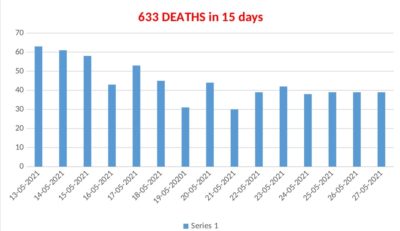 etween him and Health Minister Vishwajit Rane.
“On May 14, there was a truce between the two after Union Home Minister Amit Shah spoke to both of them and since then there seems to been no progress in the investigations,” sources said.

Even as the common man awaits justice for those who met an untimely death, 633 more people perished in last 15 days.
Goa has so far lost 2538 innocent lives. Many of them in last one and half month for lack of oxygen.
Despite the government boasting about installing of 20,000 litre mega LMO tank at GMC, there has been no considerable decrease in deaths of COVID19 patients.
Even the shifting of patients to the new Super Speciality Block has not helped, experts say.

Oxygen allocation for Goa
increased to 55 MT
Meanwhile, the Union Ministry of Health has enhanced Goa’s Oxygen supply to 55 MT per day in view of the active Covid case load of the state.
A letter to this effect has been issued by the Union Ministry to the state govt today. Total oxygen allocation for Goa is proposed to be retained at 55 MT with Jindal Steel Works (JTPML) Dolvi supplying 20 MT, Tayo Nippon Sanso, Pune supplying 24 MT and Kolhapur Oxygen and Acetylene supplying 11 MT of oxygen to the state.
The Centre has also allotted 100 more vials of Amphotericin-B, used in the treatment of Mucormycosis or black fungus to Goa