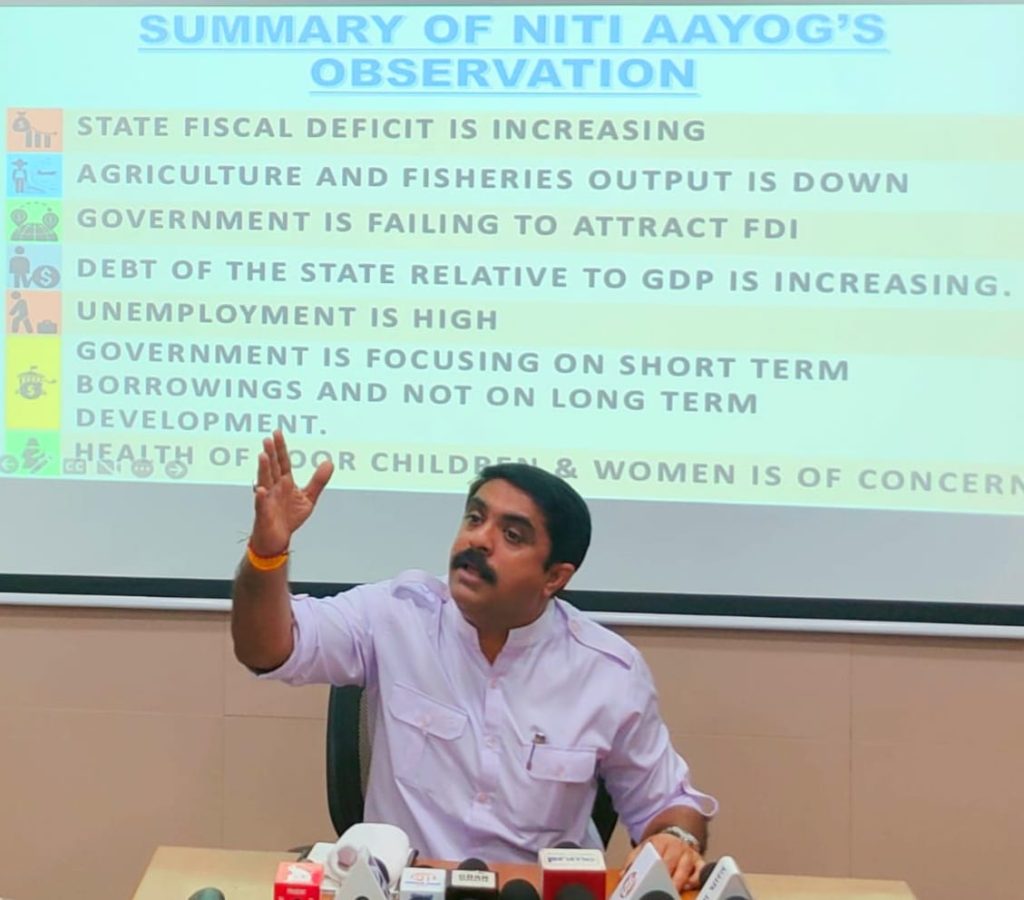 Goemkarponn desk
PANAJI: The scathing report of NITI Aayog has exposed Chief Minister Pramod Sawant’s repeated lies that all is well in Goa and has pointed to serious and far-reaching failures in his administration, said Goa Forward President Viaji Sardesai.
Sardesai, briefing the press, said that instead of accepting criticism for the betterment of Goa, he has chosen to acquit himself and accuse NITI Aayog of making mistakes.
“This is akin to a student tearing up the report card instead of accepting failure and striving to do better the next time. Such an attitude will not help improve the abysmal State of the economy and employment in the State,” he said.
The NITI Aayog reiterated many of the issues Goa Forward President Vijai Sardesai raised in the monsoon session of the Goa Legislative Assembly.
According to the presentation by NITI Aayog to the CM, unemployment in Goa is ranked 3rd highest in the Country at 10.5% in 2021-22.
“While the CM rebuked Niti Aayog’s figures, he doesn’t seem to understand that Niti Aayog does not calculate unemployment data. The data is compiled through the Periodic Labour Force Survey by the Ministry of Statistics. These figures are conservative. The reality is much higher than PLFS figures,” Sardesai said.
He said that according to data from the Centre for Monitoring Indian Economy, the MoM average unemployment for Goa in the year 2021-22 is 14.9.
“Both these agencies cannot be wrong about Goa’s unemployment scenario,” he said.
Further, he says the NITI Aayog presentation reveals that the fiscal deficit for 2022-23 is higher than the limit set by the 15th Finance Commission of 3.5%.
“If this is true, then Dr Sawant, in his budget speech, misled the House when he claimed that the fiscal deficit was within the 4% limit which Sawant claimed was set by the commission,” Sardesai charged.
He said the presentation revealed that Goa is spending 29% less than what was promised in the budget, that agricultural and fishing production in Goa has been declining since the last few years, that there is an increased prevalence of stunting and underweight in children and increase in the prevalence of anaemia amongst children.
“The NITI Aayog noted a low Ease of Doing Business Score for Goa, indicating that Businesses have to spend a lot of time to comply with regulations in the State. How is it that even after setting up the single window Investment Promotion Board and providing several services on Goa Online, Goa is ranked 24th in India?” he questioned.
Sardesai also said that Goa ranks 28th in terms of the number of MSMEs, having 70,000 micro-enterprises, 1000 small enterprises and 0 medium enterprises.
“This is not surprising since 21.24 Lakh Sqmtr IDC land lies vacant while private industrial land, for example, land owned by Zuari Industries, is diverted towards residential use,” he said.
The former Dy CM also said that the presentation observed that between 2017 and 2021, Goa’s Debt/GDP ratio has increased by 25%, indicating a burden on long-run state own funds; High Primary deficits indicate short-run borrowing requirements are higher (interest on loans) and less focus is on capital expenditure (Long Run development).
“The observations hold true given the fact that the government is closing down schools rather than opening new ones, projects such as Panjim and Margao court buildings, Kundaim hospitality college, etc. are taking twice as long to complete even though the government is regularly borrowing Rs 100 Crores twice a month,” he said.
In other words, Sardesai added because of the government’s fiscal policy, the people of Goa will be burdened with heavy taxes in order to repay the State’s debt while the development of the State will slow down.
“NITI Aayog is a think tank of “experts” handpicked by Prime Minister Narendra Modi and was established as a replacement for the Planning Commission. The opinions of NITI Aayog thus must be considered as the opinions of the Modi Government. Chief Minister Dr Pramod Sawant must accept that his policies have failed, and he must resign immediately, or the BJP High command should sack him,” he states.