Don’t have COVID19 certificate, NO WORRIES, come via backdoor 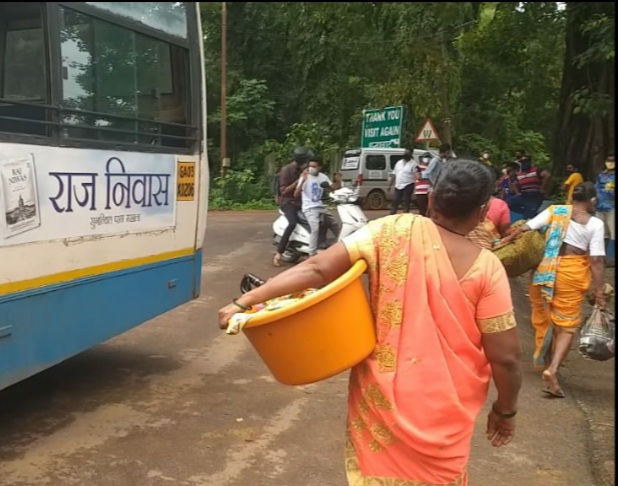 Goemkarponn desk
CANACONA: When the government and the administration including the health department is striving day and night to keep Goans safe from the Covid-19 infections, the police deployed at the Polem check-post is allowing free entry of people from Karwar through a secret pass just metres behind the police outpost.
However, it’s not clear as to why suddenly these police personnel have developed a big heart and extending such facilities at the cost of the health of the Goans when they are paid from the taxes which Goans pay to keep them safe and secure all the time locals ask.
With the advent of new technology, nothing remains hidden for long and in a similar case the residents of Polem have found out that the people from Karwar mainly fisherwomen are discreetly coming and going out of Goa daily by using a passage just metres behind the police outpost at Polem check post.

Till the locals exposed this, it was suspense as to how the Karwar fisherwomen were coming daily into Goa to sell fish despite the court making it mandatory to allow entry only after a Covid-19 certificate was produced at the gate which is valid only for seventy-two hours.
The fish selling women from Karwar come with the fish to Goa every day and sell fish by squatting at Sheller and Sristhal while some sell fish by going door-to-door at Mashem and Loliem.
Locals informed that they come up to the Mazali check post by rickshaws and then sneak into Goa by using a newly created footpath and then use KTC bus service to reach their destinations from Polem.
What is interesting to note, is the path is few meters behind the Polem police Outpost and the police manning the Polem gate feign ignorance and allow the free movement of these people, informed a local.
The government aware of the detection of the new Covid variant in Karnataka which is more dangerous than the earlier ones is putting all the effort to stop this variant from coming into Goa but the police are allowing people to move in and move out, it’s strange, he added.
Locals informed that money is getting exchanged in lieu of entry, without mandatory papers, however, it was not immediately possible to confirm these allegations.
Another local went to the extent of blaming the QCI lab which is entrusted to check the fish coming into Goa for chemicals such as formalin and ammonia for allowing the fish without checks.
It’s not new for the authorities posted at the Polem gate to be embroiled in controversies and unless the authorities act as per the law and barricade the discreet path the trust deficit between the public and the government officials will continue concerned citizens felt.