Bio-metrics were made mandatory for lifting ration quota to avoid pilfering; despite this, the food grains scam has been exposed 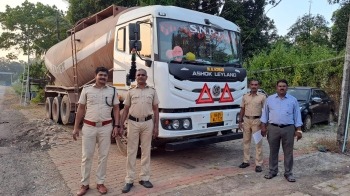 SURAJ NADREKAR/
Goemkarponn
PANAJI: The Dr Pramod Sawant Government has always been in the eye of the storm due to unwanted issues. Currently, the government is embroiled in a controversy after the Crime Branch raided godowns and seized food grains illegally transported to Karnataka for sale.
However, Chief Minister Dr Pramod Sawant gave a clean chit to the Civil Supplies Department saying there was no link of any officials to the grain smuggling racket and that it was fair price shop owners who were involved.
“The quota which was not picked up by beneficiaries is sold directly by certain Fair Price Shop owners. This was the stock raided by the Crime Branch,” Sawant said while speaking to the media about the case.
Sawant said, officials or staff of the Civil Supplies department have not sold the stock directly to the open market.
Nonetheless, whoever is responsible for the racket will be dealt with and arrested, the chief Minister said.
“I have also sought the details of Fair Price Shops. The investigation is not over. It is going on,” Sawant said.

Fair Price Shops cannot sell directly…
Speaking to Goemkarponn, a few Fair Price Shop owners disputed the claims by Chief Minister, saying they cannot sell the foodgrains without biometrics.
“The Civil Supplies department, to prevent pilfering, installed biometric machines in 442 Fair Price Shops across Goa. Electronic weighing at fair price shops were the beneficiaries, both BPL and APL cardholders, are to register by giving their thumb impression,” said an FPS owner.
He said at the time of purchasing food grains, the cardholders should again give a thumb impression.
“The data of the transaction is transferred to the central server soon after the beneficiary finishes buying. All the machines are connected to the central server located in Panaji, which is monitored by the respective officials,” he said.
Another owner said, “if there is no internet connectivity, we do not release the ration quota.”
He added that Fair Price Shop Owners can’t sell the quota outside without biometrics.
“The Next month’s ration is not released unless we submit the audit report of last month and we get the next quota minus the remaining stock in our shops. So how can we sell the quota outside,” he said, on condition of anonymity.
Bio-metrics were introduced in Goa after there are a lot of complaints of irregularities by the fair price shop owners.
Especially after the Anna Bhagya scheme
was launched though the beneficiaries should be given 25 to 30 kg of rice, many fair-price shop owners give just 15 to 20kgs of rice.