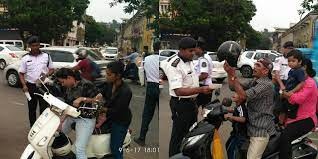 PANAJI/ PONDA: When the Government decided to implement the New Motor Vehicle Act with hefty fines, it faced stiff opposition from vehicle owners; however, the fear factor that violation would force them to shell out huge amounts has finally worked.
Thus, implementing the new Motor Vehicles Act with hefty fines brought discipline among vehicle riders. Traffic officials claimed that traffic violations such as non-wearing of helmets and seat belts are reduced by nearly 90 per cent.
Thus with fear of losing money towards hefty fines, vehicle riders developed the habit of wearing helmets and seat belts.
Earlier, for non-wearing of helmets, the rider paid Rs 100, and it was taken lightly, but as they noticed, they have to shell out Rs 1000 for offence most of the bike riders riding a bike wearing a helmet. Similar is the case of a car driver who compulsory wears a seat belt.
Traffic official said, “initially when new Motor Vehicle Act came into force the traffic department collected a huge amount of money at the initial few days due to hefty fines, however now the alert vehicle riders with fear of hefty fines following most of the rules including wearing helmet and seat belt. The minimum penalties for general offence are Rs 500”.
He said earlier that traffic officials used to issue more than 200 challans in the city per day, but they are now reduced to a great extent.
There is a rush at shops to provide pollution certificates. Similarly, there is a rush to pay annual insurance and other third party insurance.
However, despite facing the risk of paying heavy fines, some violators, including minors, enjoy the thrill of breaking the rules when they notice that no traffic police on the road can issue them fines.
It is important to mention here that in case if there is no presence of traffic police or fine issuing authority on road one can easily witness there more than 10 per cent riders driving bikes without a helmet which can be witnessed in city and village road on daily as well as on Saturday and Sunday when traffic police are not on the road to check violators.
Further, in case no traffic police are seen on the road, the violators, including the minors, drive their vehicles freely on the road.
Some riders also ride vehicles without a helmet and enjoy the thrill of violating rules by riding triple seats. Locals suggest CCTV footage at Junctions and prime locations to control such violators.