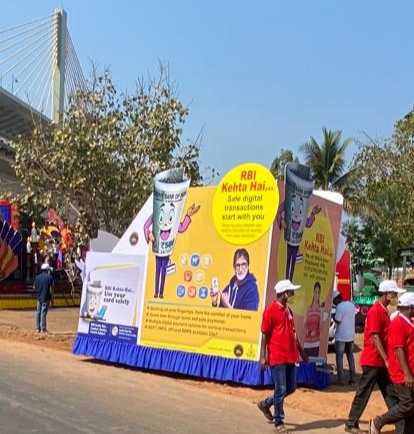 Panaji: The Float with street promotion depicting the awareness message about cyber fraud and persons or entities offers to promote loans at very low rate of interest as per the advisory of Reserve Bank of India presented by the Department of Information and Publicity evoked good response from the people when it wended it’s way from Santa Monica jetty at the annual Carnaval float parade held in the city today.

The same float will be presented at the Carnaval parade in Margao on February 14.

As part of awareness campaign the float conveying various public interest messages of Reserve Bank of India such as awareness banners, cutouts urging investers to be vigilant, jakruk baniye-satark baniye, multiple digital payment options for various transaction, beaware of high and quick return schemes could be safety etc. has been conceptualized and aesthetically designed by the reputed agency Creative Horizon from Mapusa.

Hundreds of revelers thronged the streets of Panaji today to witness and have a glimpse of various floats at the Carnaval celebration organised by Goa Tourism in association with Corporation of City of Panaji. The float parade was flagged off by Dy. Chief Minister, Shri Manohar (Babu) Ajgaonkar in the presence of Mayor of CCP, Shri Uday Madkaikar, Director of Tourism, Shri Menino D’ Souza and others near Santa Monica Jetty, Panaji which culminated at Kala Academy, Panaji.