FROM DELHI TO GOA, farmers woes continue under BJP 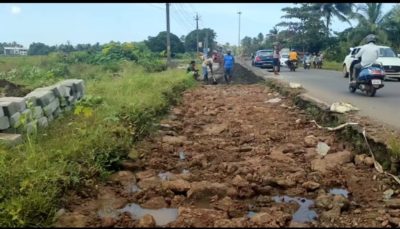 Goemkarponn desk
MAPUSA: With the State government going ahead with the beautification of the road from Canca to Mapusa, the farmers are agitated as their land has been illegally grabbed without compensation or NOC.
The farmers alleged that their land had been grabbed without any compensation and without following any protocols; the Government had already started their work.
“We, the members of Shree Bodgeshwar Shetkari Sangh, hereby condemn the act of injustice towards our Mapsekars. The beautification work is being carried out by the GTDC Department without any proper documentation and authorization,” said the memorandum 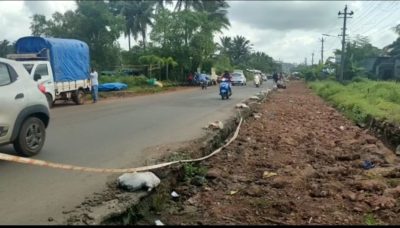 submitted to the Deputy Collector, Bardez.
They said the farmers’ fields have been grabbed by the Government without any prior notice and without obtaining NOC from the farmers, which is very unethical according to the Land Acquisition Act.
They also alleged that they have not received any notifications from the Dy Collector’s office in this regard.
“Now, as the work is going on full swing, the farmers henceforth won’t be able to enter their field to plough it. There will be no way the tractors will be allowed in the fields. The farmers didn’t

receive any compensation for their land, which was acquired by the Government, and without following any protocols, they had already started their work,” the Shetkari Sangh said.
The farmers said that if any of the Farmers questions the authorities they are threatened with the Police force.
“Government has been neglecting the voices of our farmers. Yesterday, the High Court directed the Government to rehabilitate the temporary kiosks at the Verla Canca fields at the newly constructed Kadamba Bus Stand,” they said.
“We, the members of Shree Bodgeshwar Shetkari Sangh, hereby question the authorities as to what facilities /

compensation is given to the farmers whose land has been grabbed / acquired by the Government illegally at the place where this New Kadamba Bus stand is currently being constructed. Shouldn’t be the rules be equal to all the farmers?? No such facilities have been given to our Mapusa farmers. Therefore we welcome the order from the High Court, and such law shall also be made to all the farmers whose land has been acquired by the Government for the beautification / Government structures,” they added.
The Sangh demanded the Deputy Collector of Bardez to stop the work immediately and follow the Land Acquisition act guidelines. “Notifications and NOC should be taken from the farmers before starting with the beautification work,” they said.

Probable list of candidates sent to BJP parliamentary board in Delhi: CM Sawant

SIGNIFICANT drop in COVID19 testing in the State; Is this “deliberate” attempt to hide cases?

When all the States in entire country are ramping up the testing facilities for COVID19, Goa has suddenly gone slow which seem to be a ... Read More

Goa is on the path of self-sufficiency: CM