Give Goans justice and disqualify the 12 defectors: GA 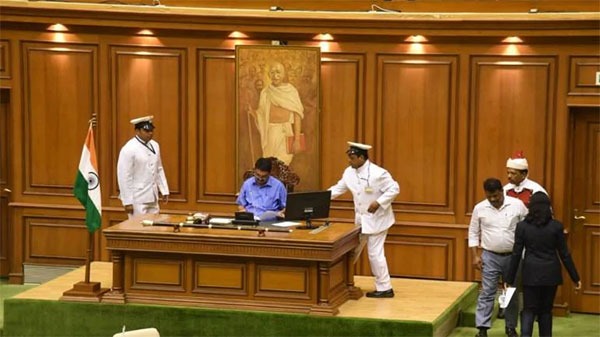 VASCO:  Goencho Avaaz Party has said that the sudden appointment of a new, full fledged governor for Goa, gives rise to justifiable speculation that new developments are on the horizon for our beleaguered state of Goa, perhaps connected to the fate of the 10+2 defectors.

With the disqualification verdict imminent, Goencho Avaaz Party appealed to the Speaker to demonstrate integrity and the moral compass to do the right thing for Goa and to finally and rightfully give the Goan people the justice that they deserve.

Having postponed the verdict so many times in the past, Goencho Avaaz Party is hopeful that the 10+2 defectors will finally be held accountable for betraying the mandate of their respective voters.

Goencho Avaaz Party, in a press release here said, it firmly believes that the only way that justice`e can be meted out to the Goan populace is by disqualifying the 10+2 defectors.

“This will send out a clear message to every other politician that it is paramount to respect the mandate of the people and put the people’s wishes ahead of their own personal agenda.  How could these defectors believe that it would be okay to change parties after being voted to power on the ticket of another party? Following the same logic, does this offer carte blanche to the Goan electorate to change their vote post elections if they are not happy with the results?,” it said.

GA said the people of Goa have been robbed of their democratic right of having a government of their choice.

“By wilfully going against the mandate of the people and compromising democracy in the state, these defectors have betrayed the Goan populace, setting a very dangerous precedent in Goa and resulting in the conception of a government through nefarious, undemocratic and underhand means. This is not a government of the people, by the people and for the people. This is a government that the people of Goa did not want and did not vote into power. And this perhaps is the reason behind the series of destructive anti-people, anti-environment policies and initiatives that we are being forced to endure in these troubled times,” it said.

GA said that while it is true that power grabbing and attempting to win elections by any mean has been the hallmark of the ruling dispensation, politicians of all parties need to understand that jumping parties is totally unacceptable in our democratic system.

“The Goan populace deserves and should get better. Given how Goa is now being sold to vested interests, the reason for the BJP party’s desperation to catapult into power by any means has become abundantly clear. And by virtue of supporting the ruling dispensation, the 10 +2 defectors have become complicit in the irreversible destruction and plunder of our motherland,” its states.