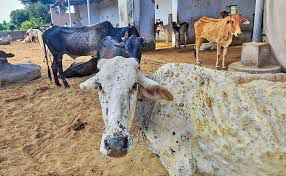 Goemkarponn desk
PANAJI: Five more cattle in Goa have tested positive for the Lumpy Skin Disease (LSD), taking the totally tally to eight.
“There are eight confirmed cases of Lumpy virus from 15 suspects, mostly from Ponda. Lumpy Virus is highly contagious in cattle and can be identified easily with boils and a reduction in milk,” said Dr Agostino Misquita, who is the Director of Animal Husbandry & Veterinary Services.
He further informed that the process of vaccinating the cattle against LSD has already begun in the state.”We have covered a majority of the animals and have also ordered more vaccines as a preventive measure,” he added.
Dr Misquita informed that the disease is not communicable to humans.
Lumpy Virus is not a zoonotic virus, meaning the disease cannot spread to humans. It is a contagious vector-borne disease spread by vectors like mosquitoes, some biting flies, and ticks and usually affects host animals like cows and water buffaloes.
The study, conducted by scientists at the Council of Scientific and Industrial Research-Institute of Genomics and Integrative Biology (CSIR-IGIB) and the State Disease Diagnostic Centre, Jaipur, has said that genome sequencing has found that the current outbreak in India has a distinct lineage of the virus and to “characterise circulating strains,”
“it is essential for early detection of the disease as well as for formulating interventions for disease control,” he said.
Although previously confined to regions within Africa, the fatal viral disease has caused significantly large outbreaks in many areas of the world in recent years. In 2019, an episode of the disease was reported from India with low rates of morbidity and no reported mortality.
However, the ongoing outbreak of LSDV has spread to various states and has resulted in the mortality of over 80,000 cattle, including cows, over a short period of three months.