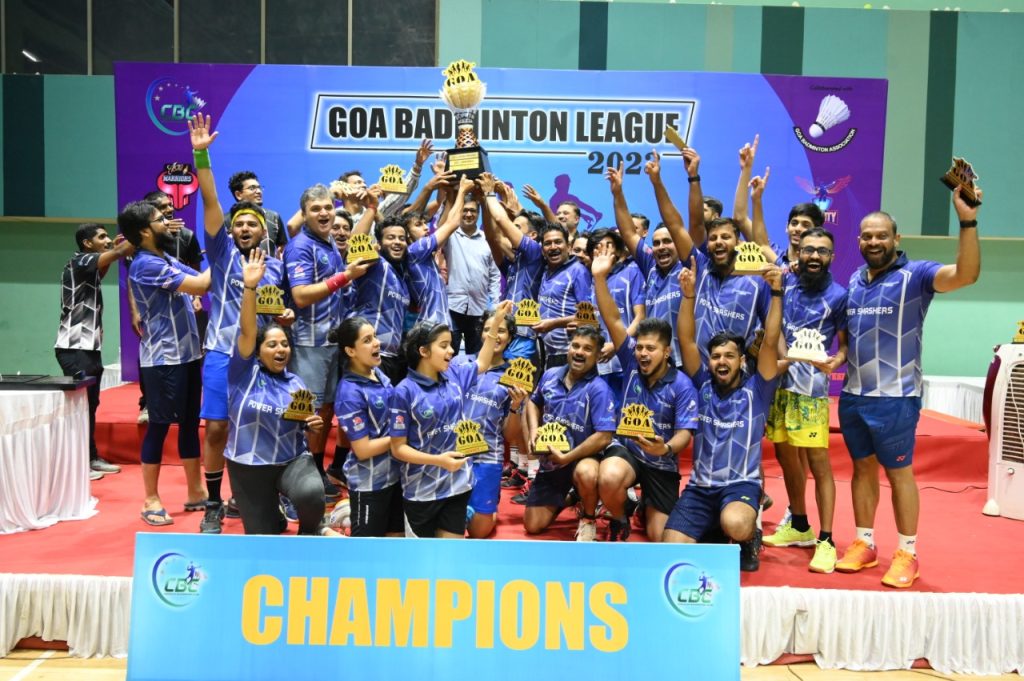 PANAJI: Power Smashers, owned by Priority Constructions, Panaji, emerged champions of the Goa Badminton League 2023 (GBL), while Ace Raqueteers, owned by Essen Group, Vasco, were the runners-up in the six-team annual tournament organised by Chicalim Badminton Club under the aegis of Goa Badminton Association at Indoor stadium, Campal-Panaji. Ace Warriors finished third in the GBL 2023, played over Saturday and Sunday with 144 shuttlers of all age groups slugging it out in the team-championship format.
In a match comprising 10 events of 15 points each, the team that registered 150 points first tasted victory. Among these 10 events – seven were men’s doubles, one was men’s singles, a mixed doubles and a women’s doubles contest that saw fascinating duels as strategy played a big part due to the fact that the teams had to plan their sequence carefully while anticipating their opponents’ tactics.
As such most of the league stage matches were close, but one team that stood out were Power Smashers, who notched up a sensational run of four consecutive wins on Day 1 to book their place in the final with one league match to spare. Ace Raqueteers, who beat Power Smashers in the last league match, also managed to win four out of five matches in the league and deservingly sealed their spot in the title clash. The final, however, proved to be a totally one-sided affair as Power Smashers led from the word go winning every single event and thereby dominating the proceedings with perfect planning and execution of their strategy.
In the opening women’s doubles event, Pratishtha Shenoy and Sagun Singh beat Sanvi Kelekar and Priyanka Karkal 15-9 to give their team a flying start. Soham Mandrekar and Manjiri Moktali looked good to begin the mixed-doubles event for Ace Raqueteers, and it seemed like a good chance for their team to stage a comeback against Power Smashers Mayuresh Vaingankar and Manju Sashidharan, who had started off shakily. However, a flurry of errors from the Ace Raqueteers pairing meant Power Smashers grew in confidence, with Mayuresh and Manju improving by the minute to bag the second event and take the aggregate score to 30-28.
There was no looking back for Power Smashers thereafter, with Mrunal Bhatkande defeating a young and talented Sanand Nair, but only after the Khelo India Goa centre trainee had displayed his potential with some delightful strokes. Chinmay Kamat and Rudra Phadte waged a valiant battle against Aman Raut Dessai and Dr Nikhil Parulekar, who prevailed to maintain Power Smashers’ 100 per cent record in the final, but Ace Raqueteers had reduced the lead to seven points by this time.
Power Smashers vice-captain Kamlesh Kanji and Viraj Shirvant then put in a smashing performance to thrash Omkar Sutar and Sohum Prabhudesai and also piled on a significant lead for the red-hot team.
Mohit Naik and Riddhesh Madgaonkar were followed by captain Ayaan Sheikh-Pankaj Naik duo in maintaining their stranglehold on the final, and by the end of the seventh event, the scoreline read 105/84 in favour of Power Smashers.
The last three events saw the same trend as it was clear that there was no stopping Power Smashers, who were running riot with Dattaprasad Parab-Wayne Fernandes, ‘playing owner’ Navneet Nasnodkar-Yash Desai and the last pair of Aditya Desai-Meghal Kauthankar; till the team reached the winning total of 150 points. Ace Raquteers had 119 points to show for their efforts in the final and, thereby, had to settle for the runners-up position. Earlier in the playoff for the third position, Ace Warriors, owned by Chandrasekhar Madhali, got the better of Sparkling Stars, owned by Yogiraj Kamat, Margao, 150-139.
Rajesh Khaunte, Owner of Shiv Samarth Group, was the chief guest for the prize distribution ceremony and gave away the prizes along with other dignitaries. Goa Badminton Association secretary Sandeep Heble, Khelo India (Goa) Centre’s High-Performance Director, Sumeet MR, head coach for badminton Irfan Khan and Praveen Shenoy, President of Chicalim Badminton Club were also present among others.
Cash prizes along with trophies were awarded, with the champions Power Smashers receiving Rs 1.60 Lakh; Ace Raqueteers bagging Rs 1.21 Lakh, and third-placed Ace Warriors receiving Rs 99,000. Navneet Nasnodkar of Power Smashers and Anushka Kuvelkar of Ace Warriors were presented the most valuable player award for males and females, respectively.
With the GBL 2023 concluding on a rousing note, Chicalim Badminton Club’s fantastic organising team signed off from the venue after promising bigger and better platforms for promoting badminton and players in Goa.