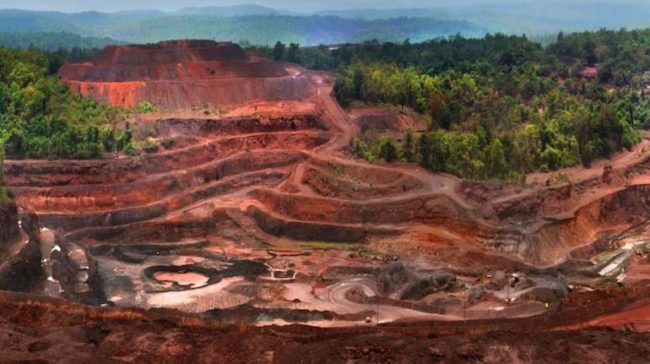 Goemakpronn desk
PORVORIM: In a major development, Chief Minister Dr Pramod Sawant announced that eight mining blocks would be auctioned by December 15.
“As many as eight mining blocks in the State will be auctioned through Mining Corporation by December 15,” Sawant said at the post-cabinet briefing.
Sawant informed that the groundwork towards auctioning of the first set of mining blocks in Goa is underway and that 5 to 8 blocks will be auctioned by mid-December.
Mineral Exploration Corporation Ltd(MECL), a govt of India undertaking, is helping the State to complete the auctioning process. The cabinet today cleared the fees to be paid to MECL.
The auctioning of these mineral blocks will be launched by the recently formed Mineral Corporation of Goa with the help of the State Bank of India.
This will be for the first time in the history of Goa, mineral blocks will be auctioned.
This was necessitated due to the Supreme Court order to abolish all the mining leases in the State.
Earlier, the Goa govt had auctioned mining dumps lying outside lease areas.

To undertake the Techno-Commercial proposal for assessment of mineral Acreages (Phase -I) for the State of Goa for auction-related work as proposed by MECL. The said proposal is annexed herewith.
MECL have submitted a proposal for undertaking initial work related to Geological Mapping and field related studies for demarcating the mineral blocks by collecting data in the field and submission of Report in respect of 5 mineral blocks for immediate auction process which involves Schedule of Charges, terms of payment, deliverables, estimated cost, the obligation of DMG, Goa,
the obligation of MECL, Arbitration, Force Majeure etc.
It is reported by MECL that the proposed activities like survey work, geological work, sampling work, laboratory studies and Report shall be submitted
within 30 days from the completion of fieldwork. The validity offer of the proposal of MECL is valid up to 30/11/2021.
The proposal is administratively approved by the Government with directions to place the same before the Cabinet for decision.
FINANCIAL IMPLICATION
As per the MOU signed with MECL, the cost of exploration is to be claimed by submitting a proposal to NMET and later utilize the funds from NMET to carry out exploration related work for the auction process. However, the process of submitting a detailed proposal to NET may take more time, thereby delaying the process of auction of already identified blocks. The itemized charges for 5 blocks has been arrived at by MECL as per the Schedule of Charges for Survey,
Geological work and Report Preparation applicable for the Financial Year 2020-2021.
The accommodation charges are considered as per entitlement of Officers in accordance with MECL’s TA/DA Rules and local travel expenses are as per estimated prevailing market rates.
MECL has therefore proposed total charges of Rs. 36.14 lakhs, including GST @ 18% .

WHEN VENTILATORS  TURNED ATMs for the  Health Minister, GMC

*UNREGISTERED business ARJUN LIFE SCIENCE gets the order of 59 ventilators for crores of rupees  *The work order, as per the invoice, was issued on ... Read More