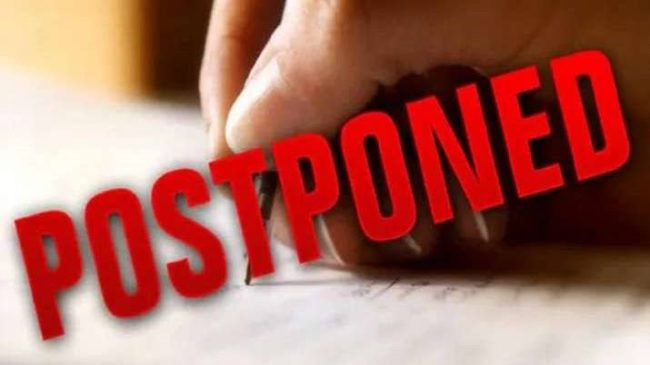 PANAJI: Amidst the rising cases of COVID-19 in the state, the Goa University today has postponed Offline examination of all general and professional programmes, scheduled from January 14 by three weeks. The exams will now commence from February 7, 2022.

“It has been decided that all the OFFLINE Examinations of the General and Professional Programmes scheduled to start on 14th January 2022 onwards are postponed by three weeks and shall be conducted from 7th February 2022 onwards,” the official circular states

However, exams for first and second year students will be held in online mode as per schedule.

The Goa unit of NSUI on Monday had called upon Governor of Goa and chancellor of Goa University P S Sreedharan Pillai demanding online examination on account of spike of COVID cases.

NSUI Goa President Naushad Chowdhari along with other members met the Governor on Monday evening and explained to him about the present situation of students facing problems.

Students have said that the world is struggling to contain the spread of COVID and save lives of their near and dear ones infected with various variants of COVID. “But the BJP government is trying to push us into COVID.”

“There are reports that Principals and other faculties of various colleges have been infected with COVID. Hence, it is dangerous to the lives of students to attend colleges. DHE canceled physical meetings with Principals.”The memorandum stated.

“BJP government is running into an expiry period. But despite this with its rude approach it is trying to put the lives of students at risk.” Memorandum further stated.

“In view of the above we had demanded to conduct exams of final year students in online mode to avoid COVID infection.” Naushad had said.

He said that despite a memorandum given to the Chief Minister last month, he didn’t pay heed to it and failed to resolve the issues raised by students.

As per the health department, 3,119 new infections took the count to 1,97,096, while two fresh deaths during the day pushed the toll to 3,539. The positivity rate rose from 30.36 per cent on Tuesday to 31.84 per cent on Wednesday. The rate indicates the percentage of people who test positive for the virus of those overall who have been tested.