Hold Assembly session before ZP election to give confidence to people against COVID-19: Rohan Khaunte 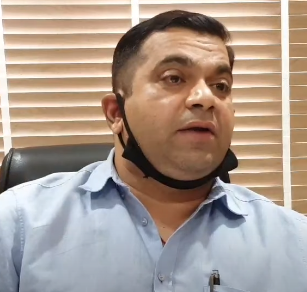 Porvorim: Independent MLA Rohan Khaunte has said that the state government should summon fortnight long or a month long Assembly Session before holding the Zilla Panchayat election to bestow confidence in the mind of voters against the fear of getting infected by COVID-19 during the polling.

Khaunte also said that Chief Minister Pramod Sawant should given undertaking to the people of the state that we will shoulder the responsibility, if there is any spike in the number of cases due to ZP polling.

The Porvorim MLA recalled that he has been asking to host Assembly session to discuss various issues including the unwarranted infrastructure projects through Mollem forest which are permitted by the government.

“BJP government should understand the pulse of the people. The people are angry over the governance. Our demand for assembly session has not been respected,” he said.

Khaunte alleged that BJP-led government was searching for “opportunities out of adversities.” He pointed out that the government has been indulging in election gimmicks like providing subsidized Onions and distribution of goodies during Diwali, which will fetch no votes for the party.

“There is a saying that you cant fool all the people all the time. People of Goa know it very well what is required,” he said.

Khaunte said that before declaring the dates for ZP election, the government should summon assembly session for 15 days or a month so that all the MLAs will come together and instill confidence in the people that it is safe outside.

He pointed out that when government decided to resume 10th and 12th classes, it decided to take undertaking from the parents that the school management will not responsible for spread of the virus to their kid.

“Similarly, CM should also give in writing that he is responsible, if there is spike in COVID-19, due to crowds at the polling station during ZP election,” he said adding that more than seven lakh people are eligible to vote in these election. “I expect the government to act responsibly,” he said.