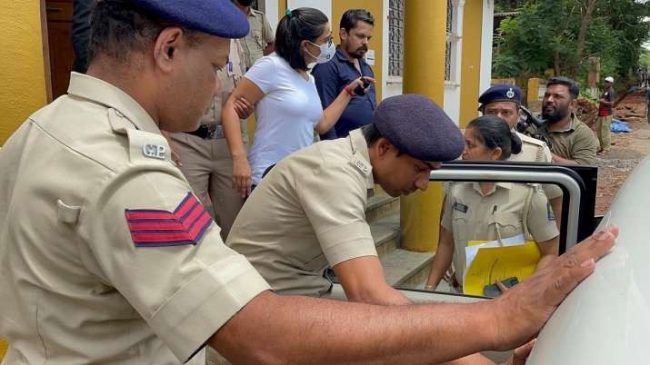 Goemkarponn desk
PANAJI: When Maharashtra political drama was at its boiling point with the top leaders busy counting the number of MLAs they had, a 30-year-old woman, Sonia Doohan — a politician from Haryana — was trying to repeat her 2019-like “rescue” operation, where she had managed to flee with four NCP MLAs from Gurgaon. At that time, BJP’s Devendra Fadnavis was trying to form a government with NCP’s Ajit Pawar, after Assembly poll results were divided.
This time, however, things went haywire. Doohan, national president of the NCP students’ wing, had gone to Goa and checked into Hotel Taj Resort and Convention Centre in Dona Paula using “fake” identification documents, and was later arrested. Rebel Shiv Sena MLAs, who had moved against Uddhav Thackeray, were based in that hotel. Both Doohan and her aide, Shray Kothiyal (28) were granted bail on Sunday.
The NCP, however, rubbished Goa Police’s claim that the leader and her aide Shray Kothiyal (28) had used fake documents to get into the hotel. The 30-year-old said they were treated like “terrorists” and were harassed by the authorities. National president of NCP’s youth wing Dheeraj Sharma said both were in Goa as tourists and were “harassed” for no reason.
BJP government in Goa is troubling the youth while giving all kinds of protection to MLAs from Maharashtra, who were on the run,” Sharma told news agency ANI. He also said that his colleagues were “framed” and it was a move to “politicise the situation”.
Doohan, however, steered clear of the allegations against her. The leader mentioned she was picked up from the hotel around 5.30am by police, commandos and members of a political party on Saturday. Doohan mentioned that she was treated and questioned for hours just a like “terrorist” by cops and officers of intelligence bureau.
“This move was an attempt to suppress the voice of youth,” said the leader.
“I don’t understand why the youth who arrived here as a tourist were arrested,” Sharma added while to the case. The two were arrested on Saturday under sections 419 and 420 of the Indian Penal Code for personation and cheating,” police said.