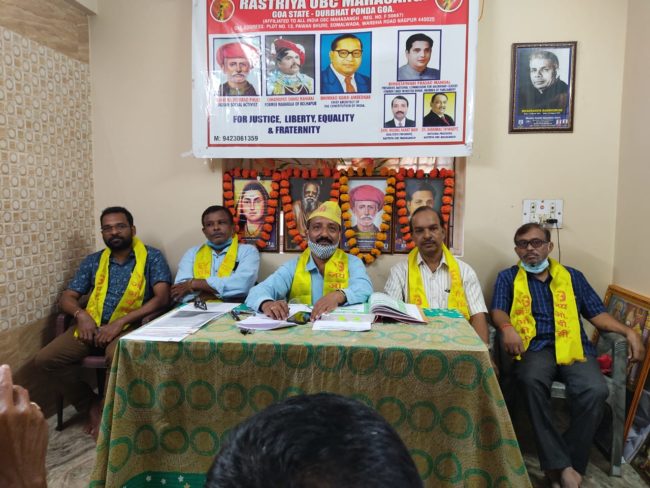 PONDA: Rashtriya OBC Mahasangh Goa demanded immediate implementation of Supreme Court order and asked for 27 per cent OBC reservation for NEET PG and UG at GMC and political reservation.
Rashtriya OBC Mahasangh Goa State President Madu Naik addressing to media and OBC members welcomed the verdict of the Supreme Court of India on 7 January, which upheld the constitutional validity of OBC reservation in NEET PG and UG.
SC Judge stated in the verdict that it had upheld Constitutional Validity of 27 per cent reservation in Postgraduation and UG in all States.
Madu Naik demanded immediate implementation of Supreme Court order so that medical students pursuing PG in GMC get justice from the current year.
OBC students were deprived of reservation for PG courses at GMC in the past few years. Madu said in Goa 49 post exist for PG and in this OBCs will get 27 per cent reservation. The Government had already issued 2020 for SC, ST and OBC in this regard and that it should implement that order immediately, giving reservations to students in PG for the academic year 2022.
Naik also demanded the Government of India to conduct a census of the OBC Population and give them Political reservations.
He said in the absence of imperial /census data, eleven lakh OBC people will be deprived of becoming panch, Sarpanch and ZPs. In Maharashtra and Madya Pradesh, the elections are likely to be held without political reservation for OBCs. So before it happens in Goa, he urged elected representatives of OBCs to demand a political census of OBCs so that they retain their reservation in the forthcoming election

Goemkarponn desk Panaji: In a series of consultations, the Ministry of Mines has proposed a complete change in the way inherited mineral wealth would be ... Read More

MOLLEM: The Goa excise officials intercepted a vehicle from Telangana and seized 79 cases of liquor bottles worth over Rs 2.75 lakh at Mollem check-post. ... Read More