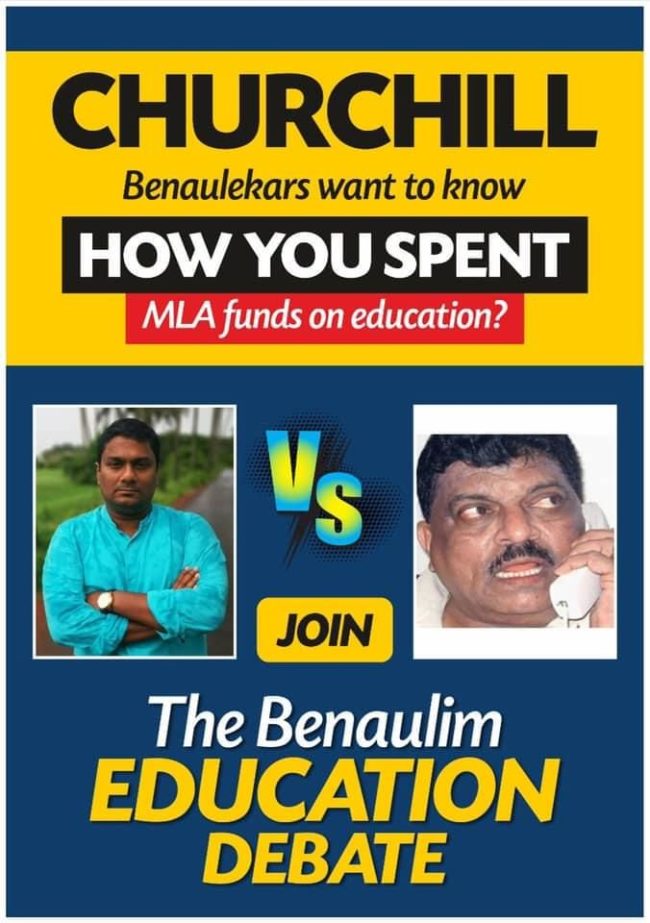 Goemkarponn desk
BENAULIM: Giving a sneak-peek into what is in store for the 2022 Assembly elections, people of Benaulim were treated to dhirios (bull-fight) in the constituency over a petty issue.
Tense situation prevailed in Benaulim last night after the Aam Aadmi Party (AAP) volunteers were stopped by Churchill Alemao supporters for posting banners of debate on Education.
Both the parties have filed police complaints against each other.
When contacted, the Colva police said we have taken complaints from both ends and carried out a medical examination of both parties.
“The medical report is awaited,” police said.
Eyewitnesses said that the fracas started after AAP supporters posted banners of Churchill-Capt Venzy debate on Education.
Churchill’s son Savio and nephew Warren stopped AAP supporters from posting banners saying they don’t have the proper permission.
After a brief tussle, a few AAP volunteers were injured.
The incident has put fear and anxiety in the minds of the people.
AAP volunteers said the Varca strongman Churchill Alemao is very close to Ruling dispensation, so he has put a lot of pressure on police to hush up the incident.
Police have so far not registered any case.
Locals question that if this is the situation before the election, then what will happen at the election time.
The election commission has to take a step to control Gundagiri done by MLA supporters, locals said.
Speaking to the media, Alemao said that his people cannot be blamed for the incident.
“AAP can do whatever they want but cannot use my pictures on their banners. They have no right to do so,” he said.
Captain Venzy Viegas said that the Churchill Alemao supporters attacked their ZP member Hanzel Fernandes and other volunteers.
“Just because we could not produce permissions for banners, can anyone take law in their hands?” Capt Venzy asked.