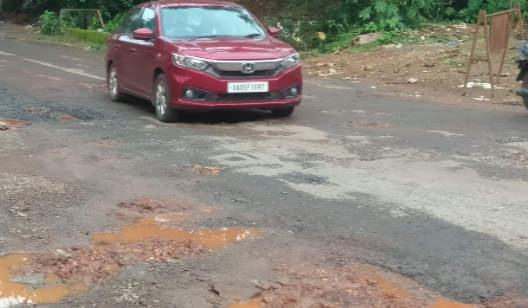 Goemkarponn desk
PONDA: The Pondaitees are desperately waiting to see Acche din for one km long Daag -Ponda road, which is turned from bad to worst due to long pending sewerage work.
The locals said they were tired of travelling through a bad and bumpy road which was dug six years back for the sewerage network.
The locals say that the government takes note of their sufferings and relieves them. They demanded PWD Minister Nilesh Cabral inspect the road to find an urgent solution for the restoration of Daag Ponda road.
Now suffering for six years, everyone major ordeal, including senior citizens, complains of back pain on commuting on pothole-ridden roads. Want relief with hot mix carpeting and making the road smooth.
Complaining about bone-breaking experiences and back pain caused to them, the senior citizens, along with Ponda locals, protested at Daag Kapileshwarim road.
Even though the work is completed, they are covered with rough cement and concrete patches, which gives them tremendous back pain, locals said.
Viral Sapre pointed out that PWD Minister Nilesh Cambral should inspect this road.
“Generating apps for roads is a joke. If the public has to find out the potholes for App then what is the use of JE, AE, EE and government officials who receives salary to the tune of thousands and lakhs who have to maintain the road,” he said.
It may be recalled that the Ponda roads were dug for 15 MLD sewerage treatment plants five years ago; however, at many places, the work is completed, but roads are not restored yet.
Similarly, on this one km road stretch between Kapileshwarim underpass junction to Daag Ponda and Tisk Ponda Court building, the Sewerage department had dug almost six chambers with a depth of 10 to 12 meters.
The work here was delayed due to basalt rock formation on sewerage lines. Now though work is completed and chambers filled, they are covered with rough cement and uneven concrete giving a bumpy ride while there is no sign of restoring roads for which people crying for the attention of authorities.
The PWD Road Division XVIII officials said the sewerage department had not given the completion certificate of their sewerage work on some of the road stretch dug by them unless their work is complete.
“We can’t take hot mix carpeting off some of Ponda roads. Wherever they have received a completion certificate, we will take hot mix carpeting work. But all this work would commence in November to December as it’s still raining,” he said.
PWD Minister Nilesh Cabral said he will definitely visit Ponda soon to inspect the sewerage work and find an early solution to restoring roads affected due to sewerage.
He said it was still raining. He said at some places, the sewerage work is pending, and rain also is a hurdle for workers.