Many challengers to Babu in Quepem 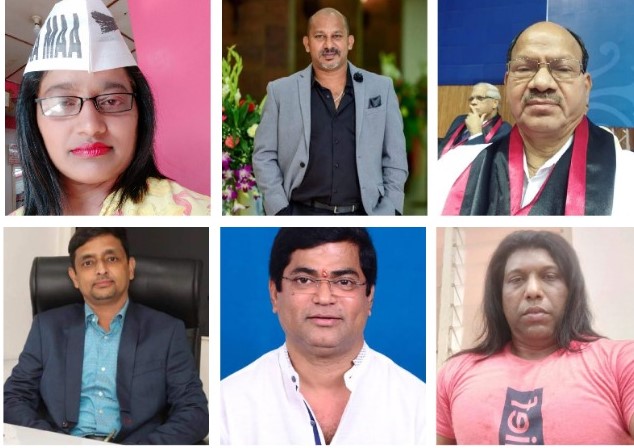 Goemkarponn desk
QUEPEM: While we talk of Assembly elections in Quepem constituency there are only two big names – the current Dy Chief Minister of Goa Babu Kavlekar and ex-MLA Prakash Velip.
Though Chadrakant Kavlekar (Babu) seems to be undisputed king of Quepem for now, there are under-currents in Quepem to dislodge Babu, who has won four consecutive elections since 2002.
There is some twist, as there are many desirous candidates who want to contest and win considering that there is no Congress candidate after Babu jumped ship to join BJP in 2019.
Alton D’costa, Patricia Fernades, Yogesh Kunkolikar and Alexy Fernades seem interested to contest the coming Assembly Elections, besides Prakash Shankar Velip.
Out of six, three are new faces – Alton D’Costa, Patricia Fernades, and Yogesh Kunkolikar.
According to the locals, this time Chandrakant (Babu) Kavlekar might have a tough fight as Alton Dcosta, a new Congress leader in Quepem has been going extra miles in Panchayat and Municipal areas.
D’Costa has also started to take up important issues like water problems and other issues faced by the farmers in Quepem, due to which he is been in limelight.
During the just concluded municipal elections, D’Costa won four out of 13 seats in QMC.
Whenever Quepem politics is discussed, there is no way, that veteran politician Prakash Velip’s name can be ignored.
He is always considered as a strong candidate and is well respected politician not only in the constituency, but also in Goan politics.
He has contested almost 8 times in the Assembly election out of which 4 times he was victorious, in which 3 times was through Congress and once through MGP.
He contested last Assembly Elections through BJP where he lost the seat to Babu Kavlekar, with not so huge difference.
Speaking to Goemkarponn, Alton D’costa says he wishes to contest upcoming Assembly elections “I will focus more on the employment, rural development and health of the Quepem Residents” said D’costa. Also the development will take place without harming the environment”.
“Congress won’t take back the betrayers. Also the party has good support, though we lost ZP and municipality elections, we will surely win this time,” told D’costa.
Veteran politician Prakash Velip says “I haven’t thought about whether to contest or not. However, it is the decision of the party that matters and the decision will be respected.” Alexy Fernades, South district president of Shiv Sena wishes to contest elections in Quepem constituency. He says he has got good support from the youth. 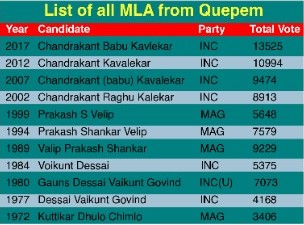 In 2004, he had contested South Goa parliament election and Curchorem Assembly elections in 2007 as an independent.
Patiricia Fernades, AAP convener from Quepem said, “I am a AAP supporter and it all depends on what party decides, however the decision of the party will be respected. Last time the volunteers from Quepem had put a lot of efforts, but we had no luck. This time won’t let others cheat us”
She said that elections are manipulated by those in power, that’s the reason it is difficult for an honest party to survive.
“Nevertheless in 2022 elections AAP will give a good fight, and let the people decide then, whether they want water, electricity, health/medicines and ration free of cost” she added.
Yogesh Kunkolikar businessmen of Quepem, and BJP karyakarta said that he has good support in Quepem and his well-wishers are asking him to give a thought regarding contesting elections,
“I have not yet decided whether to contest or not but I am very happy to receive such support,” he added.