We will be opening up govt schools for adoption to banks, societies & temples, says CM 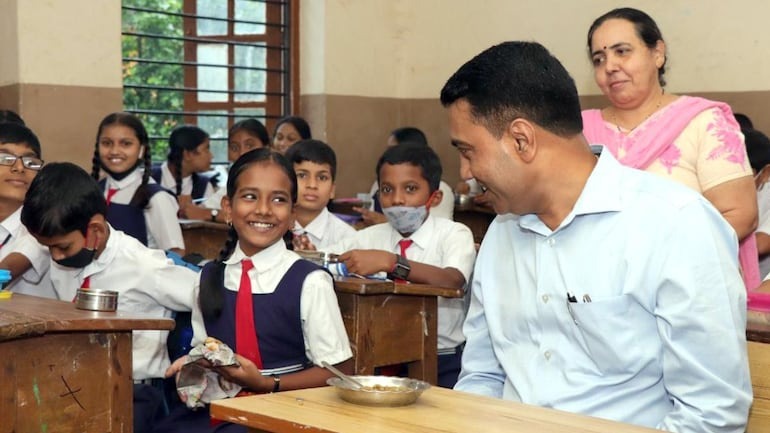 Goemkarponn desk
MARGAO: While stating that the government has no intention of closing down its primary schools, Chief Minister Dr Pramod Sawant today said that the state government is thinking about school merger only in the interest of the students
Chief Minister today interacted with the students, parents and teachers via virtual mode during the program Shiksha Pe Charcha.
“The state government is thinking about mergers only in students’ interest. Schools should work to increase the number of students to avoid closure or merger. There is no other intention of government,” said CM Sawant.
He further said that the merger of schools will be done after taking parents and teachers into confidence.
“It is not good when students of different class levels study in one classroom at some schools due to lack of students and teachers; this is an injustice to them and must be addressed,” he added.
Sawant said many primary schools have only four to five students or just one teacher for a class, which clearly affects the quality of education.
He claimed that with the merger, we can ensure more students in one class, and the number of teachers will also increase.
Sawant also assured to ensure improved education at the primary level to improve Maths and Science scores in response to the NAS report.
“Under the central government scheme, government primary schools will be available for adoption to neighbourhood banks, temples and societies to support upgradation of school infrastructure,” he said.
The Chief Minister, during the adoption process, schools will only get aid from these and control of schools will continue with the government.
Speaking of the Sanguem school incident, Sawant said that the state government will not tolerate incidents like Valkini in Sanguem, where the teacher did not report to school because he found it too far to travel.
“We shall not tolerate any such incident, and action will be taken against him,” he assured.