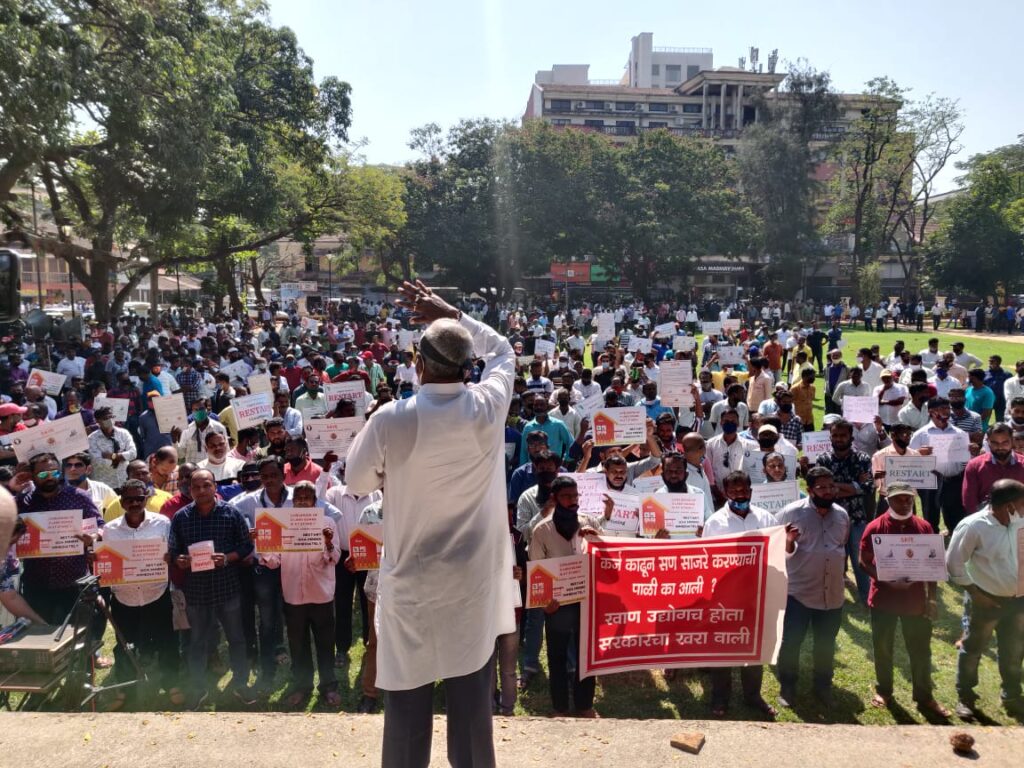 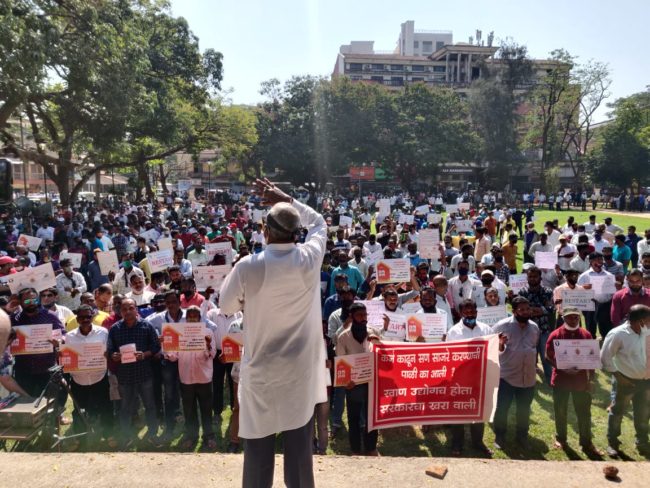 PANAJI: Thousands concerned mining dependents including women, on Monday staged a  protest march from Kadamba Bus Stand to Azad Maidan at Panjim, demanding restitution of iron ore mining before Goa loses its fourth consecutive mining year due to ban on mining imposed by the Hon’ble Apex Court of India.

Mining dependents along with Goa Mining People’s Front (GMPF) have been requesting intervention of Narendra Modi Prime Minister and relevant ministries at the centre. Despite of BJP Led govt. both at state & Centre the issue of three lakh livelihoods is still pending, with no solution in sight. The mining dependents are forced to organize this Protest March in order to grab the serious attention of Policy makers and Government. In the protest march, mining dependents also announced the mega morcha with trucks and machineries in front of CM residence if the immediate solution to the Mining impasse is not sought.

Modi during the last election campaign had acknowledged the severe impacts due to stoppage of Mining and had assured the required intervention for immediate resumption of mining in Goa but despite of BJP lead Govt. at State & Centre, yet decisive steps remain to be taken. If an immediate solution is not developed, the fate of Goans will languish amid a global economic slowdown during a pandemic.

While addressing the rally GMPF President Puti Gaonkar Said “We strongly condemns the acts and intentions of the Goa foundation which has lead to destruction of over three lakh livelihoods and severe economic collapse in the state of Goa. While the Goa mining case hearing for review petitions in the Hon’ble Supreme Court are continuously getting postponed, we were hopeful that in the reform package for AtmaNirbhar Bharat for Mining Sector the Centre would consider amendment to the Goa Daman and Diu concession Abolition Act. Despite our continuous representations, uninterrupted pleas, and a list of assuring words from the Centre and State government, the same we understand was not a part of it. One fifth of Goa’s population is dependent on mining. We are highly worried by the inaction of government.  Immediate resumption of mining activities in Goa is crucial as Goans stare at a bleak future spurred by financial uncertainties.”
“We have decided to hold another protest with trucks and machineries on March 16, 2021 in front of CM residence if no solution to our agony is provided.

Balaji Gauns from Dharbandora Truck owners association said, “It is startling and hard to believe that despite there being the same party ruling both at the State and Centre, how mining reforms in Goa Daman Diu Abolition Act wasn’t considered while Narendra Modi government is taking all possible measures to make India ‘AatmNirbhar’.If the government can decide in the favour of coal mines auctions to generate jobs in the country, then why there is blatant ignorance in the case of Goa. The immediacy to break the livelihood stalemate in the state rests on the fact that tourism, Goa’s biggest revenue and employment generator is expected to be on a standstill for the next 4-5 quarters. If mining activities not resumed with immediate effect without losing the fourth year, the days aren’t far when Goans will have no money to feed themselves.”

Over the past three years, mining dependents have met and submitted various appeals/representations/memorandums seeking intervention and action from the authorities at the State and Centre level including Honourable President of India, Honourable Prime Minister, Union Home Minister, Union Mines Minister, Union Law Minister, Chief Minister of Goa, various MP’s cutting across party lines, and bureaucrats at Centre and State to take note of the plight of the people of Goa.