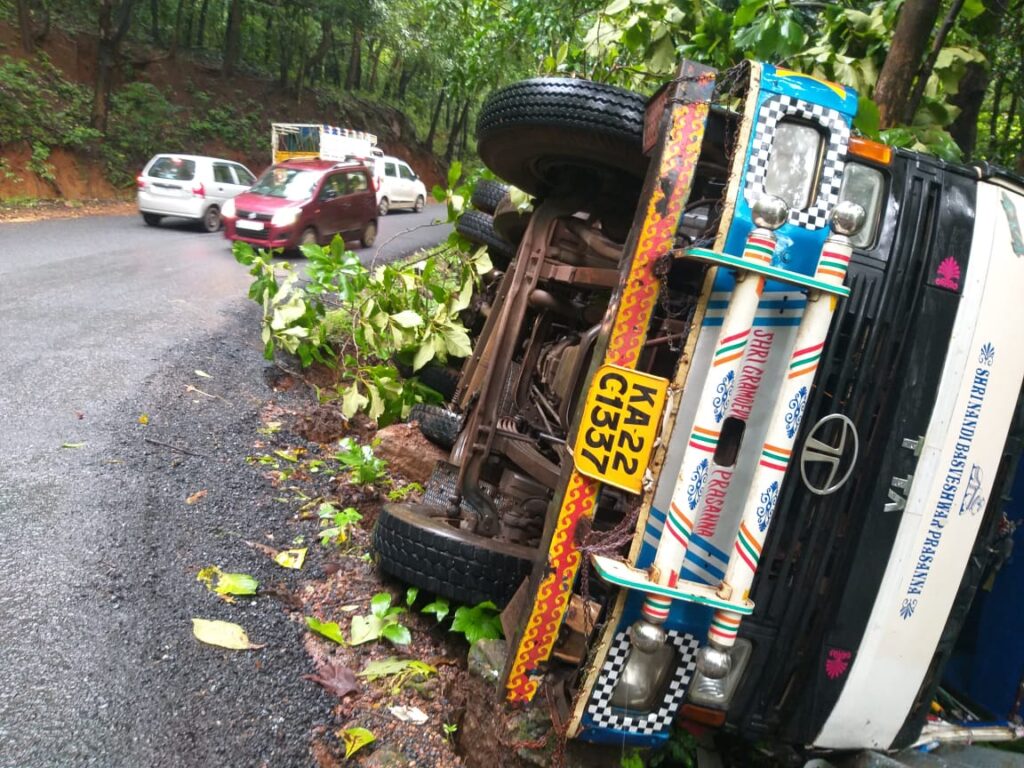 Goemkarponn desk
CANACONA – Even as the demand for immediate commencement to construct the long-due 4- lane road from Canacona to Margao, yet another truck, an Inter-State one, plunged off the narrow NH-66 and crashed into the Crash Barriers at Karmalghat on Sunday.
The loaded truck is bearing no. KA 22 C 1337 headed towards Margao fell off the narrow road on the steep turn before it crashed on the crash barriers.
According to sources, the truck’s front mirror has broken, throwing the driver out of the vehicle. The sources point out the truck, while climbing the Karmalghat and negotiating the steep turn, has strayed an inch off the tarred section of the narrow road having no space whatsoever to provide sufficient space to an oncoming vehicle, but the truck itself went down and crashed on its left onto the crash barriers.
The driver was reportedly thrown out of the vehicle and suffered injuries before being shifted to CHC Canacona.
This is the third accident of this month alone; the previous two trucks have become total loss ‘, informed a resident.

Meanwhile, locals complained the narrow NH-66 road, especially from Gulem to Balli, has become of the bone of contention for repeated accidents, and asked the government to immediately take up the works for widening by constructing the long-due and pending 4-Lane road. ‘It’s a highway, and there’s not even an inch of space beyond/across the tar road, making it very treacherous and dangerous for traffic. Unless the road from Gulem to Balli is not constructed, there’s no way motorists will get solace from accidents ‘, stated motorist saying he had just reached the spot after the truck fell with a crashing bang.’