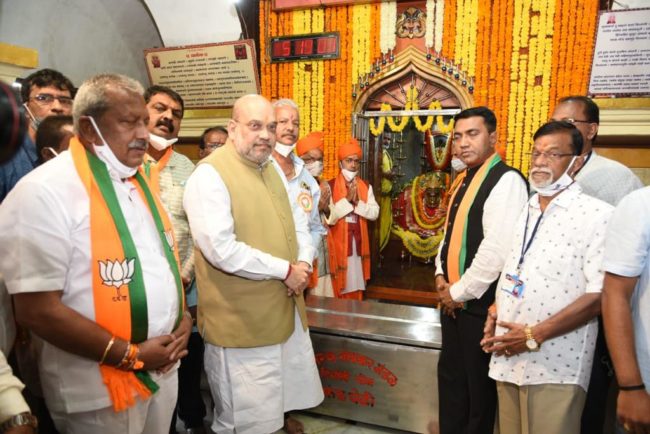 BICHOLIM: The Home Minister, Amit Shah, blamed former prime minister, late Jawaharlal Nehru, for delaying the Liberation of Goa from Portuguese rule.
He stated that Pandit Nehru was the one who was responsible for the delay in getting the freedom to Goa.
He was speaking at the public meeting at Bicholim.
“It was Pandit Nehru because of whom Goa freedom was delayed. BJP will give every panchayat three crores while the municipality will get five crores. Even mining will begin in the next six months.” Shah told.
He said that there are only two options in elections: Congress and BJP.
“Goans have seen both the governance. Congress was unstable while BJP gave stable governance,” Amit Shah said.
“During the next five years, we will have Samrudh and swayampurna state. In every field, Goa is first whether it is per capita income, vaccination drive or giving toilet facilities to common people.” Shah said.
He said that the central government has given a lot of funds to the state, which Congress had not done.
He said that Goans have to decide whether they want Congress, a family-based party or BJP, which is for development.
The Chief Minister, Dr Pramod Sawant, also charged Pandit Nehru for the delay in giving freedom to the state and thereby leading to underdevelopment.
“One should compare the governance of Congress for 20 years and BJP of only seven years which has led to development,” CM said.