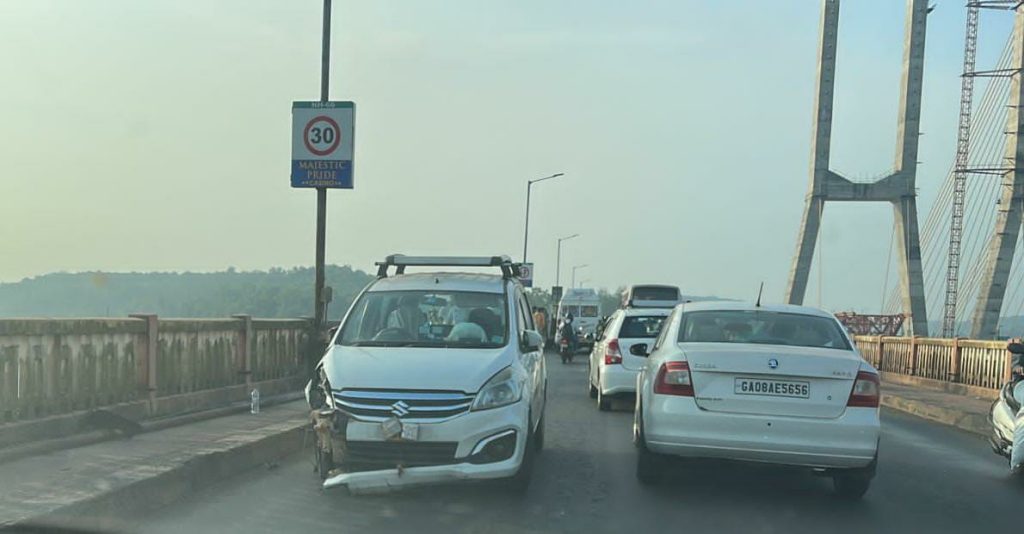 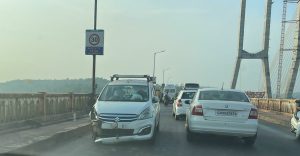 Goemkarponn desk
CORTALIM: An accident reported between a tourist taxi and a Tempo Traveller on early Monday morning held traffic movement at ransom for over one hour
A huge queue of vehicles piled up on either side of the Zuari Bridge and also along roads between Vasco and Cortalim as well.
The traffic police immediately swung into action and managed to control the traffic and allow one-way movement on the Zuari bridge till the crane could be pressed into service to clear and shift the vehicles off the bridge.
Finally, after about 45 minutes, the towing crane managed to tie away both the vehicles off the bridge, and the traffic movement began at a languid pace on either side even as the traffic police staff attached to Vasco police station began controlling the movement of vehicles at Cortalim circle and along the Zuari bridge
Vasco PI Shailesh Narvekar speaking to the media said that the traffic jam was witnessed for around 45 minutes even as the movement of vehicles began smoothy and in a streamlined manner by about 9.30 am.
“There was an accident between a tempo traveller and an Ertiga tourist taxi car at around 6.45 am on the bridge near Aggacaim side, and by the time we had to tow the vehicles involved in the accident, there was a traffic jam. With the tourist season at its peak and the people going for the old Goa feast besides office-going staff as well, there is always a rise of vehicular traffic, and an accident at the bridge caused the traffic jam,” said Narvekar.
“We managed to deploy our staff immediately to the strategic location and tried to clear the traffic immediately, and the traffic is moving now but slowly. The traffic jam lasted for about 45 minutes till the vehicles were cleared from the bridge, and it was only during this time that the traffic was stranded. The main cause of traffic jams is the accidents reported along this route, and an accident on the bridge makes matters worse for us,” said Narvekar.
“We have a rise of vehicles in the peak hours when there are increased vehicles after flights start to arrive in the afternoon or industrial estate people leave for home in the evening and office going hours causes traffic to slow down but accident makes things worse. However, the new Zuari bridge is likely to be opened soon for vehicular traffic, and it will greatly relieve this issue and increase the pace of traffic movement without roadblocks. The roads of the new Zuari bridge are wide enough, and both the bridges will work parallel, and the issue of traffic jams will be resolved,” said Narvekar.