No grudge against party for denying ticket to my wife, says Dy CM Kavlekar 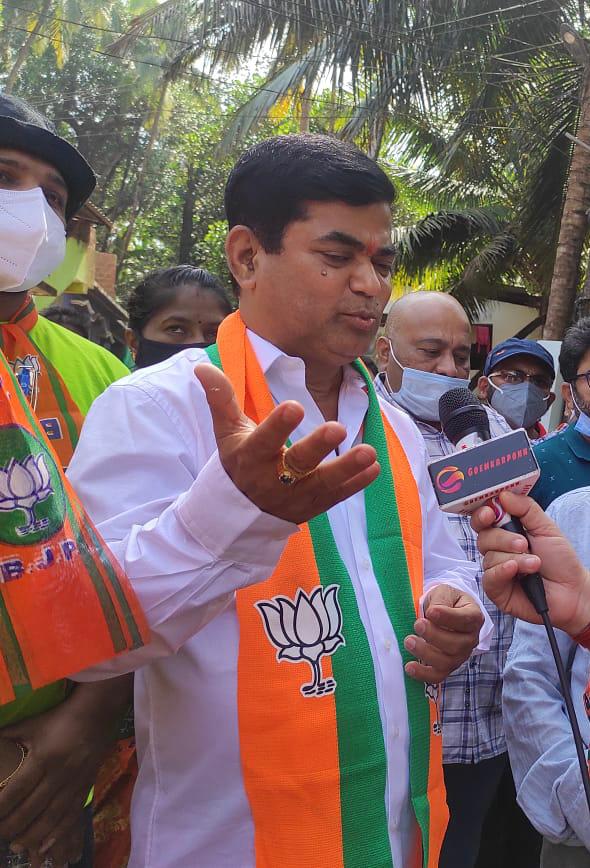 A few days ago, the BJP announced the tickets, and it sparked a new controversy with the party giving more than one ticket to the Rane and Monseratte families. At the same time, teh BJP denied the ticket to the wife of Dy CM Babu Kavlekar, Savitri, who later decided to contest independent. Goemakrponn Editor SURAJ NANDREKAR travels to Quepem constiteuncy to speak to Dy CM Babu Kavlekar to know mor about the episode.

Goemkarponn: You are going to people asking for votes on the Lotus symbol for the first time. What is the people’s response?
Babu Kavlekar: Actually, this is not the first time I went to people asking for votes for lotus in Zilla Parishad elections, which were on party lines. Yes, as an MLA, I am going to people for the first time. There has been no change in people’s attitudes or responses because I joined BJP. In fact, looking at the response, I feel we will get much more leads than I have got since 1998.

Goemkarponn: After you put Congress, the party has now put its entire might in this constituency. Their top leader Priyanka Gandhi also campaigned here in this village of Morpirla itself a few months ago. Your view?
BK: When I campaign, I do not see who my opponent is; my concentration is on my work and my workers. In 2012 also, my opponents tried their best to defeat me, but they failed as I was confident in my work and workers and that year, I won by the highest margin in the entire Goa. Again in 2017, that was the same rumour, but I managed to defeat my opponents. In 2022, my original karyakartas are with me, and the BJP karyakartas have joined me. So basically, my strength has doubled. Hence, I will defeat my opponents with a double margin.

Goemkarponn: There are rumours that you are upset with the party for denying a ticket to your wife from Sanguem. Is it true?
BK: Granting tickets is the prerogative of the party. The party president Parliamentary Committee etc., decide on that. I do not want to comment on it. My karyakartas have assured me that they are with me come what may. I have no grudge against anyone and whatever responsibility the party gives me.

Goemkarponn: On one hand, you say you will stay loyal to the party, but on the other hand, your wife is fighting elections independent against BJP candidate? What kind of loyalty is this?
BK: That is the personal decision of my wife; I do not want to comment on that. I have been a loyal soldier of Congress for 22 years and not the one who will change parties every election. Today looking at the condition of Congress, I feel I did the right thing as I can now take up the development of my constituency. Dr Pramod Sawant, the chief minister, is taking all along, and we have to give him strong support. I cannot talk about my wife, but I will always do whatever work has given me.

Goemkarponn: Did you discuss with the party why only your wife was denied a ticket as Babush Monseratte and Vishwajit Rane’s spouses have been given tickets?
BK: Whatever my view is, I will put it across the right platform. I am not a person who will fight for self-interest. Whatever decision the party takes, we have to accept it and move ahead.

Goemkarponn: Isn’t it an injustice to you as two tickets are given to your colleagues while you have been denied?
BK: I told you I am not the persons who will keep the grudge. I take whatever happens in my stride and move ahead.

Goemakrponn: Talking about your constituency. We are here in the village of Morpirla, near Fatorpa; there is not a single tower in this village despite you being MLA for 20 years. Why? Don’t you think it is important for online classes for students today?
BK: Every locality has different issues. There are several hindrances objections. More than me, the village people will tell you why things have not happened. I agree several things did not happen. People’s thinking in urban areas is different, and those in village areas are different. We have got 17 towers sanctioned in this area or the constituency about the towers. Whatever works are left behind are being taken up one by one. We have taken several projects, including bus stand and other big-ticket projects. Also, being in Opposition does not help take big projects, so we did the right thing of coming into BJP, where things have now started moving. Last two years, due to COVID19, there was a delay in many things, but now everything has started. We have taken the basic needs first of water roads and electricity first.

Goemkarponn: Do you think how many seats BJP will win?
BK: I have said this before and saying it now, BJP will win with an absolute majority; there are many people, and there are many people who are criticising media. This was being said even during the Zilla Parishad elections, and reality was different. Many parties are putting up hoardings, but that does not win elections. There are several parties like AAP, Congress, TMC or RG. They have their personal agendas, but people have seen the works and development of the BJP, and that is why we are sure BJP will get an absolute majority in 2022.

Goemakrponn: Don’t you think the agitations and anti-incumbency against BJP will have no effect?
BK: No, these agitations of coal, three linear projects were there even during Zilla and Municipal elections. What was the impact? BJP will again form the government, and I can guarantee you 100 p.c.