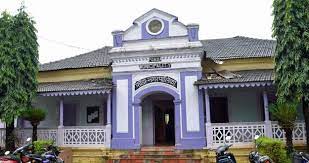 Goemkarponn desk
PONDA: The No-trust motion against the PMC chairperson was defeated
as councillors fail to turn up for special meeting
Earlier the presiding officer adjourned the meeting called today to discuss the no-confidence move against PMC Chairperson Shantaram Colvekar.
The Presiding officer Ajay Gaude declared that the meeting had been adjourned according to section 8 of rule 69 of the Goa Municipalities Act. He said he waited for forty minutes for the arrival of Councillor out of fifteen, not even a single Councillor attended the special meeting nor the seven councillors who signed a no-confidence motion turned for the meeting. So the meeting was adjourned.
PMC Chairperson Shantaram Colvekar was furious over officials for adjourning the meeting. He said this would give a chance for horse-trading. He said all seven who signed the motion were seen at PMC premises but did not turn to the meeting hall. He said presiding officials acting under political pressure.
BJP Block President Vishwanath Dalvi, who is one among seven who signed no-confidence motion against Chairperson, said, “though we are seven who signed motion we have the majority of eight, however, our two Councillor were not present today.”
He said, let’s see tomorrow what happens.
After this decision, the presiding officer declared that the non-confidence motion against Chairperson was defeated.
He cited that neither those signed motions were present to support it nor any councillors were present to oppose it. He declared that there would not be any adjournment meeting on this. He sent a report to DMA that the non-confidence motion was defeated.