Only God can save people from SONSODO mess?? 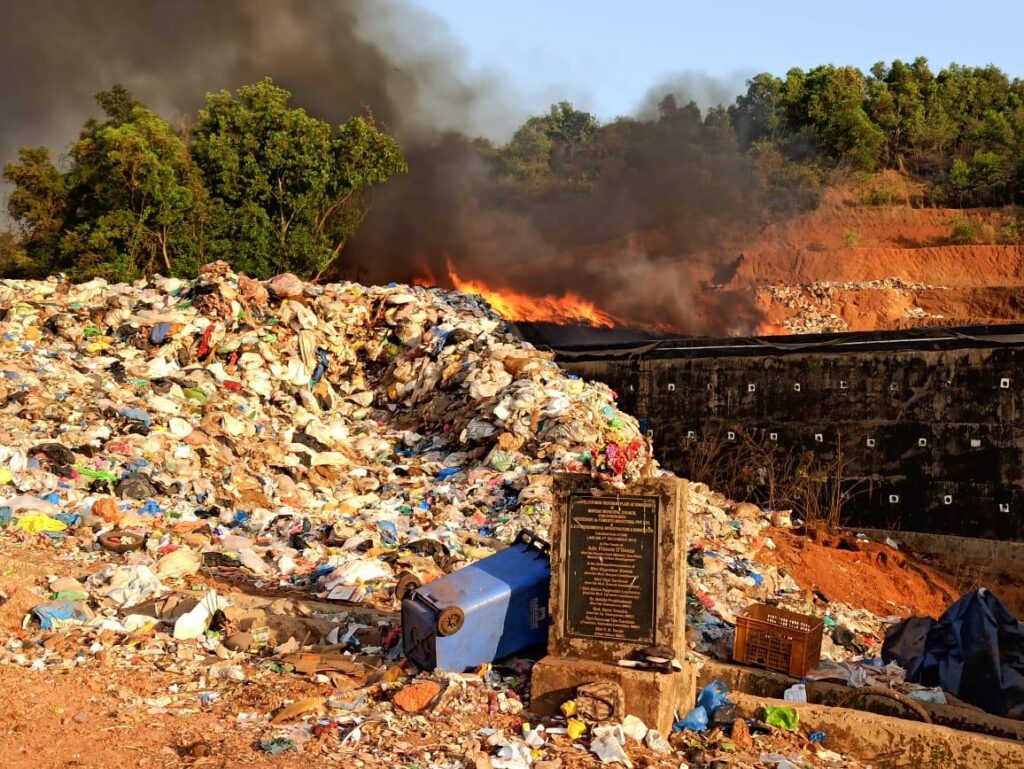 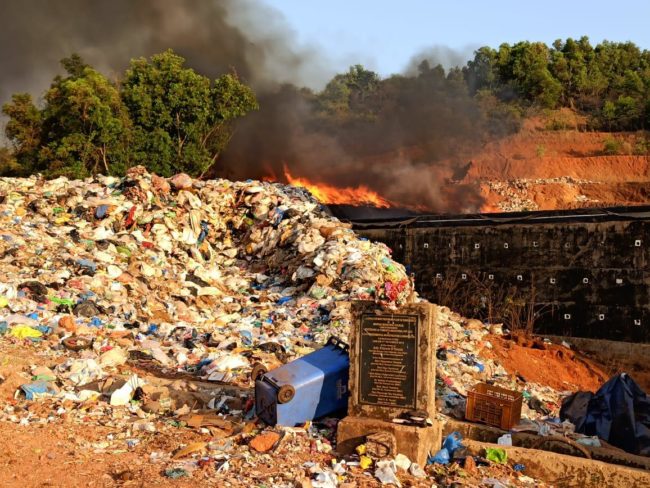 Total expenditure incurred by them from 2017 towards remediation of legacy waste, disposal of recovered fractions and covering of waste dump at Sonsodo is Rs. 8,38,40,769/-.
GWMC appointed agency M/s Hindustan Waste Treatment Pvt. Ltd. commenced remediation work at Sonsoddo from December 2019. Contractor has submitted a bill towards remediation of 1,25,000.00 m3 waste at Sonsoddo; same is being partly scrutinized and verified, and part payment is released to contractors. 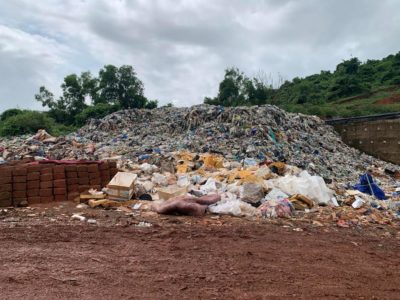 The total estimated quantity of waste at Sonsoddo was estimated at 2,31,239.76 m3. During Monsoon, the balance waste, as well as RDF, was covered using tarpaulin. Remediation works at Sonsodo resumed post-Monsoon in December 2020.
As per the tender for remediation, the period of remediation of Legacy Waste Dump at Sonsoddo, Margao is for 24 Months (excluding Monsoon). The Monsoon period is considered from 15 th May to 15 th October. The time period for Disposal of RDF and monsoon cover is 36 months – from the date of remediation work released/allotted (Excluding Monsoon). GWMC was aiming to complete remediation works at Sonsodo by May 2021 excluding disposal of RDF.
The existing waste management facility at Sonsoddo for treating fresh waste by windrow composting is operated by Margao Municipal Council. GWMC has forwarded a preliminary estimate and a proposal on upgradation of existing Sonsoddo Waste management facility to MMC which includes construction of two sheds, one for to set up three 5TPD Bio Methanation Plants and other shed for dry waste handling. Margao Municipal Council has so far not submitted to GWMC the Administrative Approval for preliminary estimates of proposal, which is necessary if GWMC has to take up the MMC upgradation work as a deposit work. 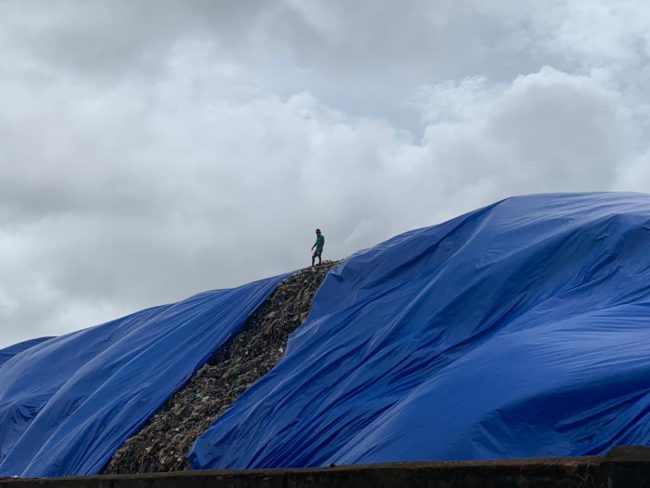 Meeting was held on 20/11/2020 at GWMC office Saligao with the Chief Architect, PWD for designing and construction of proposed shed of 2,250 sq.mts at Sonsodo. Subsequently inspection was conducted along with Chief Architect, PWD of Sonsodo site on 25/11/2020.
In order to examine the ground strata and profile it was required to clear the waste near the dilapidated shed on priority. Same was conveyed to Hindustan Waste Treatment Pvt. Ltd. The contractor is removing the legacy waste to reclaim the land on priority near the old shed.

Gaurang Prabhu/ Goemkarponn
MARGAO:
It’s the monsoon time again, and the people of the Housing Board, Fatorda and surrounding areas have started witnessing the nightmarish experience yet again – the stench and the lichette from Sonsodo dump.

Every successive MLA and Council of Margao has promised to solve the garbage problem of the Margao town, which has got worst over time.

As a duty, the Council is responsible for undertaking scientific treatment of garbage generated by the town.
However, neither the MMC has succeeded in getting segregation at the source nor has it been able to get scientific disposal of waste.

Since April the screening of the Sonsodo dump has begun, and the screening machines have segregated over 30% of the age-old mess.

However, the reality is that the dump is going nowhere. Thanks to the agreement of the MMC with the Fomento Green, there has been 0% scientific disposal of waste at the plant.

The results are seen now; as high as 60 to 70% of the waste was emptied into the dump, without even segregation.

It had equally dangerous consequences. The rotten waste coupled with precipitation or moisture made its way to the groundwater polluting the water bodies and groundwater around.

Who is to be blamed for this? This is what all are wondering and has been debated n number of times by the city fathers.
According to some, the plant should have been set up to handle mixed waste, which is not happening now. The plant officials maintain that the concession agreement mandates MMC to supply segregated waste to the MMC, which is stalling the entire process. 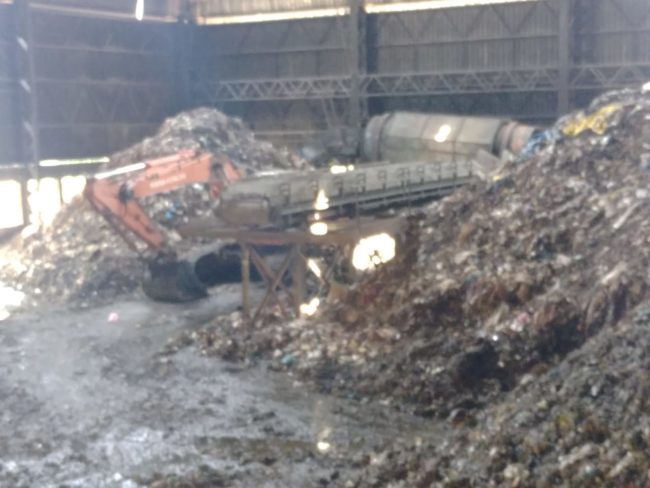 With a capacity of well over the present garbage influx, the plant has been only drying the waste inside and dumping it back outside.

The MMC had in 2016 started working on a segregated waste collection system planned by themselves.
Daily wage labourers doing door to door collection were asked to collect waste separately from the households, i.e. dry and wet waste.
The people too were urged to do so and store the dry waste in the black bins.
The dry garbage was collected by separate trucks and was being taken to the Sonsodo. The MMC also successfully set up transit stations from where the dry waste and the wet waste could be picked by the trucks. The system went well for some months and but it was too late when the MMC realised that the collection of garbage is mixed rather than segregated, which failed the entire purpose of having the system.

The major spoiler for all the garbage related initiatives to fail is the lack of infrastructure that the MMC has been facing for years together.

Savio Countino said, “The MMC in March had got two trucks that were supposed to be exclusively used to collect segregatetoste. After that in June 2016 an additional fleet othanrickshaws was inaugurated for the waste management. But despite that, the segregated waste collection has not started till date. It looks like more of a lack of will then the lack of infrastructure that the MMC is now suffering, from,” said Savio Coutinho.

Margao Municipal Council has been suffering from the never-ending problems of garbage coming from the adjoining panchayats.

This garbage itself makes up for tonnes of waste going to the plant every day.

The Davorlim, Navelim, Rumdamol, Curtorim Benaulim and other adjoining panchayat areas have only been giving construction licences for big commercial projects. Still, they have no road map on how to handle the daily waste generated by them.

The Rumdamol and Davorlim panchayat has been dumping their waste shamelessly on the eastern bypass road shaming the entire state. It has not stopped, and neither attempts have been made to solve it.

Coutinho further says, “SCM challenges and gives the Margao Municipal Council a time of 6 more months to streamline the operations at the Sonsodo plant concerning the accumulated waste inside the shed and the daily “wet waste” delivered to the Sonsodo plant”.

This is nothing but a sincere bid to instigate the Margao Municipal Council to get into action instead of making periodic announcements without results, Coutinho stated further.

“We are compelled to throw this challenge to the Council and its mentors specifically, on account of the outbursts of the Council, against citizens who visited Sonsodo and offered assistance to manage the operations at Sonsodo voluntarily. The remarks of the Goa Forward MMC Ex Chairperson Pooja Naik that the citizens should not enter the Sonsodo dumpyard without the written permission of the Council revealed that they were disturbed on being exposed that even after spending over 30 lakhs per month on Contractor’s/worker’s for segregated waste collection, the waste that reached the plant was in a terribly mixed state, which hampers processing, and eventually leading to huge quantity of piled up waste”, lamented Coutinho.

“It is utterly disgusting to note that a whopping 4.50 crores ( for 15months from May 20 to July 21 @ 30 lakhs per month) were spent on Contractor’s/workers for segregated waste collection. And finally, what we find at the plant is an unprocessable mixed waste. We have serious apprehensions that this is deliberately done to give additional work to the Bio Remediation Contractor, at the cost of public funds”, charged Coutinho.