Rahul Gandhi to arrive in State on Oct 30th 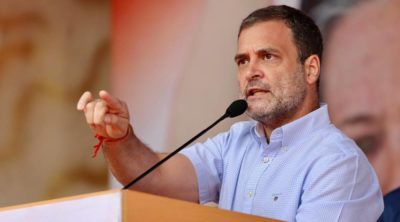 Goemkarponn desk
PANAJI: Ahead of the Goa Assembly elections due early next year, senior Congress leader Rahul Gandhi will arrive in the coastal state for a day-long visit on October 30, state party chief Girish Chodankar said.
During the visit, Gandhi would address a convention of Congress workers at SPM Stadium in Bambolim near here and also participate in various other party-level events scheduled that day, Chodankar said
According to a senior party functionary, Gandhi will arrive at 11 am on October 30, following which he will travel to the International Centre at Dona Paula where he will hold a meeting with party officials.
Gandhi’s visit assumes significance as the Congress is gearing up for the state Assembly polls next year.
In the 2017 Goa Assembly polls, the Congress had won the highest 17 seats in the 40-member House, restricting the main opponent BJP to 13.
But, the saffron party moved to ally with regional parties and came to power under the leadership of Manohar Parrikar, now deceased. The Congress had accused the BJP of “stealing” the mandate, a charge the saffron party rejected.
Over the years, the Congress’s strength in the state Assembly dwindled to four after many of its MLAs switched sides and joined the ruling BJP.

CM should ensure supply of beef; should speak to Karnataka CM: Sardinha