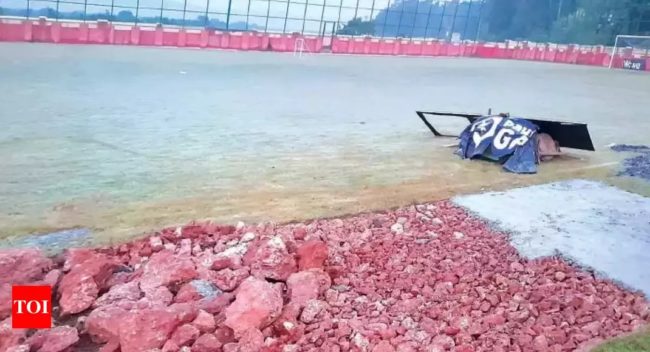 Goemkarponn desk
PANAJI: A restraining order has been placed on the Salvador do Mundo Panchayat by the Principal District Judge, Panaji, regarding their activities on ground 1 (first team practice ground).
Earlier this year, the Panchayat indulged in an act of premeditated vandalism at the Salvador do Mundo Village Panchayat Ground when the football pitch was desecrated as the turf was dug up and later filled with concrete by the newly elected members of the Salvador do Mundo Panchayat.
In an order passed by the Principal District Judge, North Goa, dated 22-12-2021, the Panchayat has been “restrained for causing any further damage to ground 1 together with infrastructure’.
The Panchayat has been given time till January 15, 2022 to reply to the matter.
Following the act of vandalism, FC Goa had temporarily moved its first team activities away from the ground fearing a possible breach in bio-bubble protocols.
The Gaurs’ First Team returned to the Salvador Do Mundo Panchayat Ground in the first week of December after assurances of police protection were put in place should the need arise to protect against a bio bubble breach.
Further announcements on the matter will follow in due course.

Aam Aadmi Party on Saturday said that the Government that had failed to devolve any of the functions to Panchayats and ZPs, mandated under the ... Read More