Running is not just an exercise; it is a lifestyle, says Lobo before D-Day 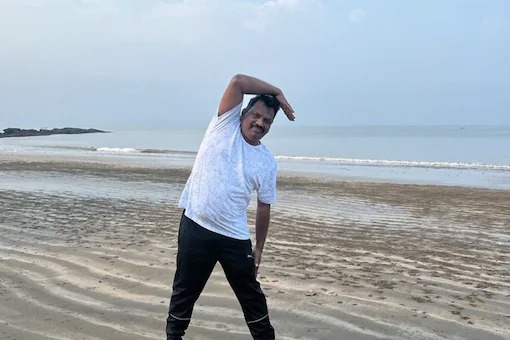 BAMBOLIM: “Running is not just an exercise; it is a lifestyle. Started my day with some light workout at Bambolim Beach Resort. Regular exercise helps managing health and boost energy to be active throughout the day.”
Former minister and Congress’ Calangute candidate Michael Lobo was on Wednesday spotted exercising at Bambolim beach, where the party has convened its election candidates and leaders in a hotel. The high command of the grand old party had a day ago deputed senior leaders for poll management ahead of the results to Uttarakhand, Goa, Punjab and Manipur.
While Karnataka Congress chief D K Sivakumar, who has earlier performed similar roles for the party in post-poll situations, will be the special observer in Goa, general secretary Mukul Wasnik, senior Chhattisgarh leader T S Singh Deo and Vincent Pala have been deputed to Manipur. General secretary Ajay Maken and party spokesperson Pawan Khera are to be stationed in Punjab, while Rajya Sabha MP Deepender Singh Hooda is in Dehradun.
Hooda on Wednesday, after meeting the candidates, said that in case of a hung assembly, the winners may be moved to Rajasthan. The Congress candidates had recently taken the oath not to switch sides and continue to be with the grand old party, “and work towards its growth after getting elected on a Congress ticket.
The party also got its candidates to sign affidavits that were then submitted to Congress higher-ups. Recently, there were rumours that top BJP functionaries were in touch with Lobo. He had rubbished the defection reports and said that BJP is a master in spreading rumors and that nobody should believe it.
It is pitiable that rumors are spread before the poll results are declared, he said. “People of Goa know who is spreading these rumors. Don’t fall prey to them. Nobody will leave Congress. Let BJP try any number of pressurising tactics,” Lobo had added.
Speaking to News18 on Wednesday, Goa Congress president Girish Chodankar said that BJP may be trying to get in touch with Congress candidates but they will not go with the saffron party. “There may be one or two BJP candidates who are power hungry. They too might resign and recontest again if we form the government. We will not betray the mandate of the people of Goa,” he added.
In 2017, the Congress had emerged as the single largest party in Goa and Manipur as the two states yielded a fractured verdict. But it failed to form the government in either as it couldn’t gather the numbers.