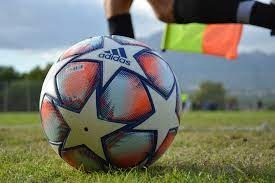 Goemkarponn desk
PANAJI: V.M Salgaocar College of Law, St. Xaviers College, Mapusa, RSN College, Vidya Prabhodini, Govt College Khandola scored convincing victories in the Inter College Football Men’s Championship 2022-23.
At Goa University Ground, in the first match of the day, V.M Salgaocar college of Law defeated Institute of Nursing, Bambolim by 2-1. In the first half Abhyuday Sabharwal scored for VMS law in 33rd minute and soon in the 35th minute Ashutosh Palni of Nursing Institute equalized the score to 1-1 at the end of first half.
In the second half, Leandro Souza scored one more Goal for VMS law in the 62nd minute, and the match ended with a final score of 2-1 in favour of VMS Law.
In the second match of Day 2, St. Xaviers College, Mapusa, defeated Goa College of Arts, Althino, with a dominating performance of 6-0. At the end of the first half, Xavier’s College was leading 5-0, where Rohit Modkar scored one goal while Shavik Khan and Pratik Naik scored two goals each.
The second half saw some organized effort by G.C. Arts to defend against Xavier’s College attack, but they couldn’t stop Rohit Shirodkar of Xavier College from scoring a goal in the 56th minute to register the first win of the tournament for Xavier’s College.
In the third match of Day 2 of P.E.S.’s R.S.N. College, Farmagudi defeated Shree Mallikarjun College by 3-1. In the first half, the score was one goal each. Vishwajeet Gaonkar scored for S. Mallikarjun in the 20th minute, and Ashish Velip scored for P.E.S. Farmagudi in the 31st minute. Jayesh Velip of P.E.S Farmagudi scored two goals in the 56th & 62nd minute in the second half to seal a victory for P.E.S. College, Farmagudi.
At Rosary College Ground, Navelim, the First match saw a one-sided affair between Goa College Engineering, Farmagudi and S.R.I.E.I.T. Shiroda with a score of 8-0 in favour of Goa College of Engineering. Avilson Miranda scored a hat-trick in the first half itself. And one goal each came from Atul Sharaf, Jaden Fernandes, Dhruv Patil, Kiran Mirashi and Krishna Pandey.
In the Second match, Vidya Prabodhini College, Porvorim, defeated Goa College of Pharmacy with a full-time score of 5-0.
Two goals for Vidhya Prabodhini came from Lokesh Kutikar, and one goal each from Vedant Hinde, Mahadev Naik and Ajay Nayak.
In the third match of the day Govt. College, Khandola defeated P.G.Goa University 3-0. Anil Raul scored two goals while Harsh K scored another goal to add a cherry to the victory of Govt College, Khandola.