SAWANT to take a GRAND OATH…. 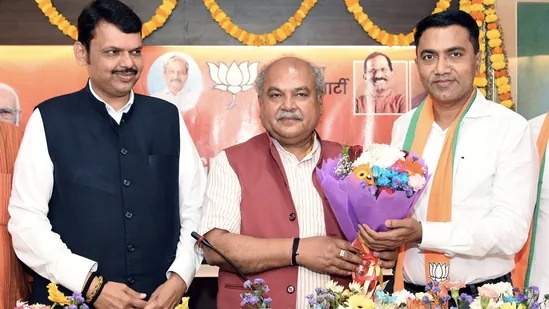 Goemkarponn desk
PANAJI: Pramod Sawant will take oath as the Goa Chief Minister for the second term on March 28.
Prime Minister Narendra Modi will all also participate in the swearing-in ceremony.
Sawant has also invited Home Minister Amit Shah and BJP President JP Nadda for the ceremony.
“Swearing in on 28th Monday at 11 am at Shyama prasad Stadium; PM Modi and Amit Shah,” said Sawant.
Sources said that chief ministers of seven BJP-ruled states are also scheduled to attend teh ceremony.
BJP announced on Monday that Sawant will continue as the Chief Minister of Goa after he was unanimously elected the legislature party head, 11 days after he led the saffron outfit to its second-best performance in terms of seats in Assembly polls in the coastal state.
Soon after Sawant was elected the leader of the legislature party in Goa, the BJP staked a claim to form the new government with support from two MGP MLAs and three Independent legislators for a third straight term, a credible achievement in a state known for its political volatility and shifting of loyalties.
The BJP, which won 20 seats in the 40-member Assembly, just one shy of the majority mark of 21, submitted letters of support from the Maharashtrawadi Gomantak Party MLAs and three Independents MLAs — Aleixo Reginaldo Lourenco, Dr Chandrakant Shetye and Antonio Vas – to Governor P S Sreedharan Pillai, who invited Sawant to form the next government.