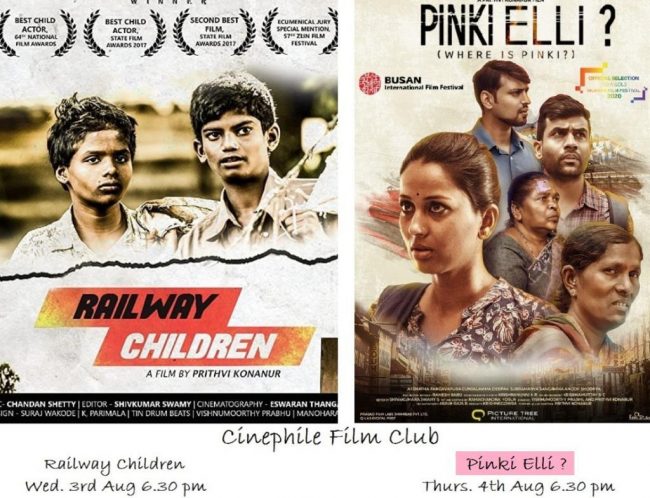 Goemkarponn desk
PANAJI:
In its continuing endeavor to bring the best of cinema to the audiences in Goa, the Cinephile Film Club of the Entertainment Society of Goa not only screens quality international and Indian films every week but also gives an opportunity to film lovers to interact with filmmakers and artists.
This week, Sachin Chatte will host the screening of two acclaimed films, Railway Children and Where is Pinki? (Pinki Elli?), directed by Prithvi Konanur, on 3rd and 4th August at 6.30. pm. respectively. The director will be present for both the screenings, which will be followed by a Q&A. Both the films will be screened at Maquinez Palace auditorium, Old GMC complex, in Panjim.
Prithvi Konanur is a US returned techie who realized that cinema is his calling and studied film-making at the New York Film Academy. Presently, he is based in Bengaluru. He is known for his independent films and has extensively used non-professional actors, in a very effective manner.
Here are the details of the films –
Railway Children (3rd Aug, Wed. 6.30 pm, 1hrs 53 mins)
Inspired by the book ‘Rescuing Railway Children’ written by Lalitha Iyer and Malcolm Harper, the film is about children who run away from home and live at stations and trains. The film made it to several festivals around the world and won the National award for Best Child artist in 2017.
Where is Pinki? (4th Aug, Thursday, 6.30 pm, 1 hr 50 mins)
Inspired by a true story, the film is about a couple that returns home to discover that the caretaker and their little baby have gone missing. Two of the primary characters in the film work as real-life domestic help. The hard-hitting social drama shot with a shoestring budget was screened at the Busan international film festival in 2020 and won accolades at other festivals as well.
(For more details, please visit www.esg.co.in)