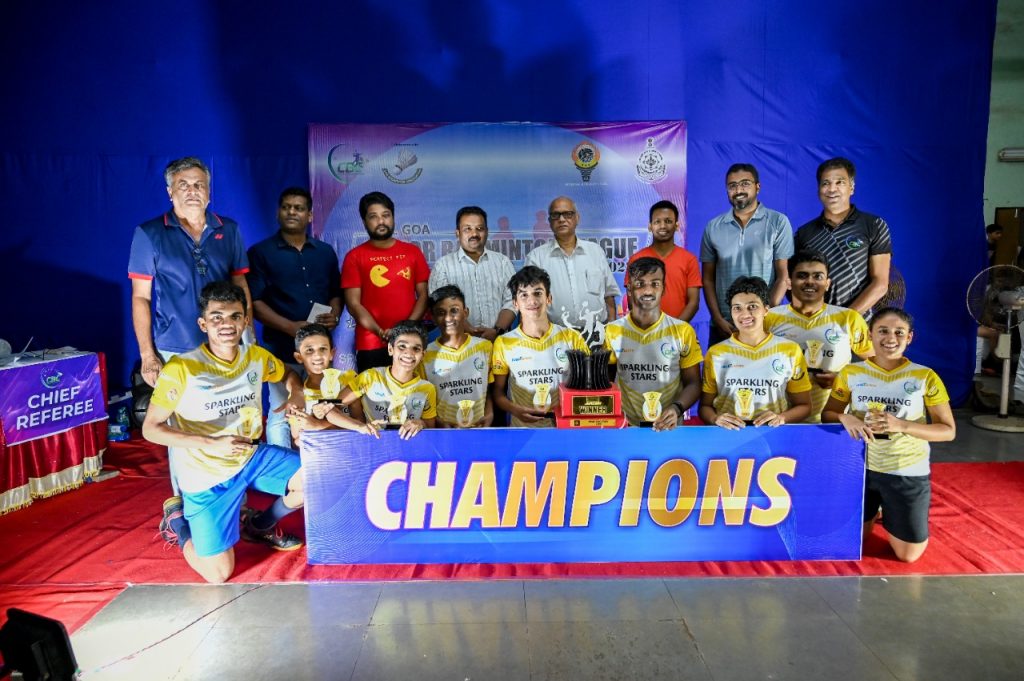 Goemkarponn desk
PANAJI: Team Sparkling Stars’ edged out Magic Touch 75-72 in the All Goa Junior Badminton League 2022, organised by Chicalim Badminton Club under the aegis of Goa Badminton Association, at Chicalim on Sunday. The event saw five teams vying for the coveted JBL Trophy. Several of Goa’s top-ranking players battled it out for glory on an eventful day at the Chicalim Indoor stadium.
The winners, Sparkling Stars (Coach Vinayak Kamat), won a cash purse of Rs 20,000, while the runners-up Magic Touch (coach Mohammad Nadaf), were awarded a cash prize of Rs 15,000. ‘Overlockedd Smashers’ (Coach Karan Dhavaskar) won third place beating Team Sharp Razors with a scoreline of 75– 72. They were awarded a cash prize of Rs 10,000. Yash Desai and Lakshita Sawal emerged as the Best Male and Best Female players of JBL, respectively.
JBL was conducted in a team-event manner and played in a league format where each team played the other 4 teams.
Five games per match were played, comprising 15 points per game, leading to a cumulative score of 75 points per match. At the end of the league stages, the top two teams competed in the finals, and 3rd / 4th placed teams competed for the 3rd place prize.
Digambar Kamat, former Goa CM and Chief patron of Goa Badminton Association; Ajay Gaude, Executive Director of SAG; Sumith M R, Director of Khelo India State Centre of Excellence in Goa, Irfan Khan Head Coach of Khelo India – Goa, and Praveen Shenoy, President of Chicalim Badminton Club (CBC) graced the closing function.