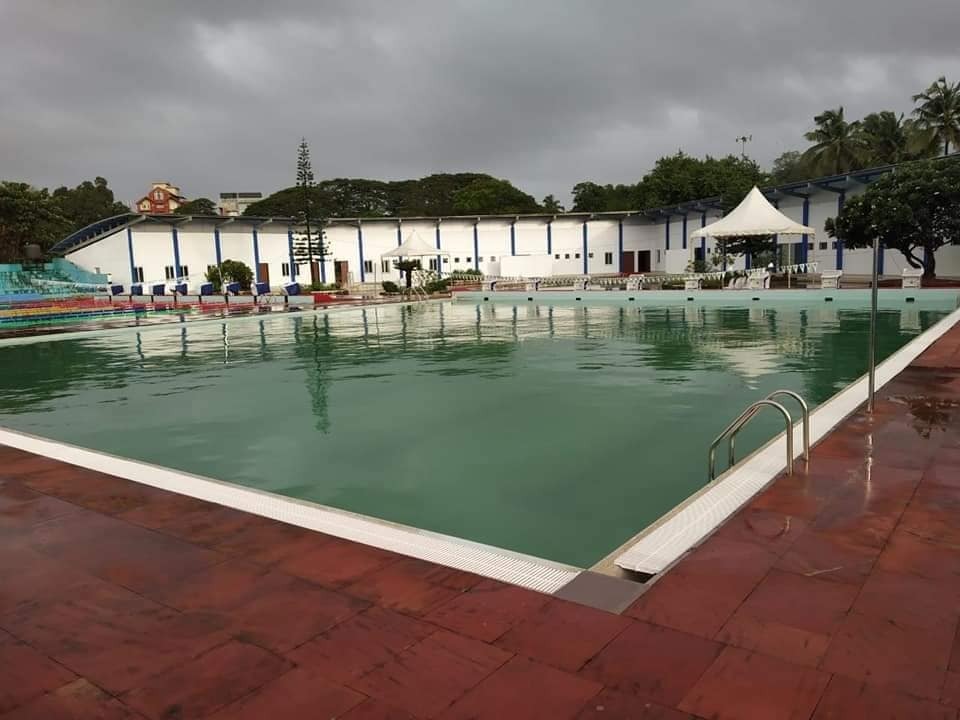 Goemkarponn desk
PANAJI: The Aam Aadmi Party Vice President Valmiki Naik on Monday attacked Sports Minister Govind Gaude for fooling the people of Panjim and Goa by faking an “inauguration” of the Campal swimming pool complex in July 2022 when in fact, nothing is working at the pool complex, and no one can use it as of today.
Naik said the so-called inauguration was nothing but a theatrical production by Gaude, who is also Art & Culture minister. Naik alleged that Gaude staged a fake inauguration with props, lighting, and event management for the media.
“The starting blocks from which swimmers dive into each lane have disappeared after the inauguration. The filtration plant, which was claimed to be as per international standard, is not working. The new access road and entry from which media persons were welcomed during the inauguration is no longer functional. The complex looks like a construction site which is far from complete. The entire inauguration was a farce, with props and equipment displayed for the media event only as if it was a play or Tiatr.”, Naik alleged.
Naik stated that even the renovation of the pools is not actually complete, and there is major leakage due to which 8-10 tankers are replenishing the water on a daily basis.
While briefing the media, Naik said, “Campal SAG swimming pool complex was used by not just the residents of Panaji but neighbouring villages like Santa Cruz, Porvorim, Taleigao etc. The swimming pool was shut down from the public for three years for renovation purposes. State swimmers faced tremendous inconvenience due to its shutdown. Their training was hindered, and they faced many problems travelling to other swimming pools”.
Naik demanded that the Campal SAG swimming pool complex should be opened not only to Khelo India Swimmers but also to the general public at the earliest, as the Minister has wasted enough time and money on this project.
Naik also tore into Govind Gaude’s capability, stating that the projects run into controversies whichever ministry he handles.
“When he was the Minister for Civil Supplies affairs, 200 tonnes of Tur daal rotted. As the Minister for Art and Culture, he has destroyed the Kala Academy. As Sports Minister, he has made a mess of the swimming pool complex and dared to inaugurate this disaster”.
AAP leader Sunil Signapurkar slammed the Sports ministry for completely ignoring the needs of sportspersons. Stating that state swimmers had to travel to Peddem ground for training for the last three years, Signapurkar demanded that the pool complex be readied at the earliest.
Alleging a scam in the lodging and boarding of the Khelo India athletes, Signapurkar said, “The food contract has been given to a wedding caterer from Bicholim. Now instead of healthy food designed for sportspersons, the caterer is giving Chicken Xacuti and Paneer Butter Masala to the athletes, damaging their health and performance.”