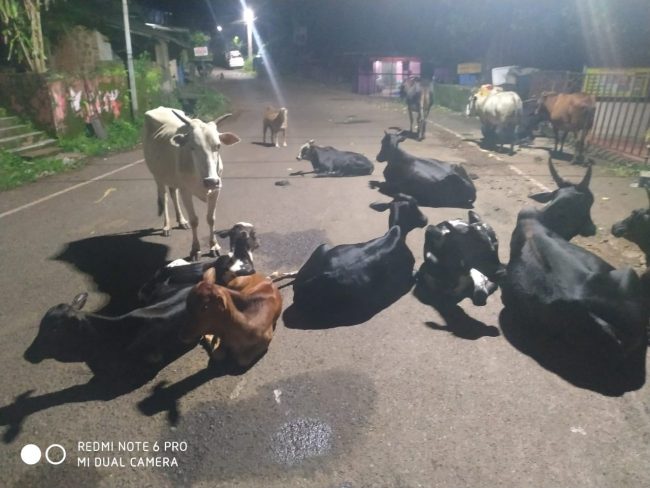 Goemkarponn desk
CANACONA: The problem of stray cattle is nothing new to road users in Goa and particularly in Canacona, but in the last few months it has reached alarming proportions that road users particularly at nighttime are put to great risks of the safety.
Herds of stray cows and buffaloes roam freely is a regular feature on interior roads, leaving aside the chronic problem on Highways but causing a great hindrance to traffic.
The most vulnerable are the two-wheelers, who have been injured, some very badly after the vehicles skidded after hitting cows/stray Cattle and slipping over the cow dung which lies strewn on the road.
At night, vehicle users cannot spot the Cattle, especially on the streets with poor or no illumination.
“The roads are already a nightmare, are turned dangerous and more accident prone due to the presence of cattle, across any of the village roads. Not only does the stray Cattles put us, motorists, into jeopardy, but the poorly illuminated road conditions put us to greater misery,” stated an autorickshaw driver from Agonda.
He further asked, “how do we cope with the stray Cattles resting throughout the day and nights on the road, is a matter of great concern to all of us. By morning leaves and heavy cow dung on the road make the road slippery to motorists.”
Several incidents have occurred, particularly when two-wheeler riders have fallen down after hitting cows on the road; some have been badly injured, while for many others, such mishaps have been life-threatening, said Vinod Phaldessai.
“If we consider Agonda village, it’s always and a regular stray Cattles day and night out. In some locations, stray Cattles not only continuously rest on the road during the daytime but also fails to leave the roads at night time. It’s not an easy task, particularly for 2-wheeler riders, to ride on village streets at Karashir-Moll, Parvem, Mudkud, Beach road, Dhavalkhazan; you’ll find every road is infested with stray cattle,” he said.
Seeing neither the owners nor any authorities bothered to stop the cattle occupying the roads, particularly at nighttime, people have even approached the Panchayat Administrator Biva Velip at Agonda. But, the administrator too expressed his inability to attend to the grave issue of motorists’ safety.
“Administrator informed us that Panchayat elections will be held shortly, let the newly elected Panch’s and Sarpanch take the initiative on removing stray cattle from the roads,” Prabhudesai said.
Recently, two women were thrown off their bikes after hitting cows during darkness in back-to-back two incidents.
While owners who otherwise own the cattle, especially cows, make no efforts to take the cattle straying on roads back to their cattle sheds, not even any other agencies claiming to be Cows protect Cows come forward to solve the problem.
Many in the village opine panchayats should have cattle pounds to evict the stray cattle hindering traffic on roads, as leaving the bovines in such situations is also not good for the safety. Still, it’s a cruelty to the animals, as many end up fatal injuries, while consumes garbage containing plastics bags, indigestible materials and sharp objects, which develops complicated health conditions to them.