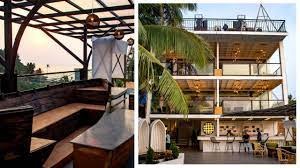 Goemkarponn desk
PANAJI: Sunburn announced today its formal exit from the franchise deal it had signed with M/S Den Liquor, Goa.
Sunburn had entered into a franchise agreement with M/S Den Liquor, Goa, for its brand, ‘Sunburn Beach Club’ for a location at Vagator in Nov’ 2020.
In a press note issued here, Sunburn organisers said that they believe in following the law of the land. In over 14 + years of existence, Sunburn has complied with the law and will continue to do so.
During eight months of the brand license, since December 2020, of ‘Sunburn Beach Club’, the club was operational for less than seven days. The rest of the time it was shut under government order.
After several months of waiting, Sunburn finally exited the franchise deal through its notice dated: 21st July 2021
Sunburn will continue to partner its franchisee’s for Sunburn Super Club, Hyderabad, Sunburn Super Club, Pune. (Opening soon), Sunburn Super Club, Bangalore. (Opening soon), Sunburn Cafe & Bar, Pune. (Opening soon), Sunburn BLAK, Bangalore. (Opening soon), Sunburn White, Goa. (Opening soon).
Sunburn, Asia’s no one music festival brand, also one of the top EDM festivals worldwide, started in Goa in 2007 and owed its existence to Goa. Over time, Sunburn became a lifestyle brand and did strategic alliances/ licenses for Sunburn watches with Fastrack, apparel with Jack & Jones, audio accessories with boAt and Radio with indigo. Soon the brand will also offer sunglasses, footwear, jewellery, perfumes and cosmetics, alcoholic beverages etc.
Covid 19 has affected the entire world. Sunburn is no exception. Still, during 2020/21 Sunburn innovated and engaged with its fans online with several events, including a fundraiser for Goa, in partnership with Facebook, headlined by Dimitri Vegas & Like Mike.
Sunburn can’t wait to bring the party back to Goa as soon as conditions are right and the government of Goa permits.
Manoj Agarwal, CEO Percept Live, reiterated that “while it’s unfortunate to end a relationship, what is paramount to us is that all laws are complied with. We have faith in our partners that they will resolve the current issues and will be back in business very soon”.
Karan Singh, COO Percept Live & CEO SUNBURN, said that “we will continue to bring the Sunburn experience to our fans through our F&B formats across India”. He also said, “Sunburn festival will be back in Goa as soon as conditions are conducive”.

ABOUT SUNBURN
Sunburn, a Percept Intellectual Property, is Asia’s Premiere Electronic Dance Music (EDM) Festival, and is ranked amongst the world’s biggest music festivals. Started in 2007 as a 3 day music festival in Goa, Sunburn has grown to become an aspirational lifestyle brand boasting an eclectic mix of music, entertainment, experiences and celebration that has seeded music tourism in India. Over the past decade, Sunburn has brought together renowned International and Indian artists to entertain hundreds of thousands of dance music lovers across the country and overseas, and positioned India as a prime dance festival destination to the world.
Sunburn is a Percept Intellectual Property. With a team of over 200 people and 28 offices across India and the Middle East, Percept is at an enviable leadership position in the Entertainment, Media and Communications domain