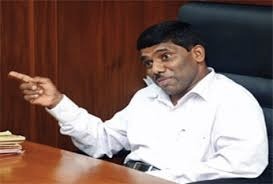 CANACONA – Other than capitulating on the BJP’s saffron tag, did Tawadkar’s Scheduled Tribe image once again helped the Lotus to bloom in Canacona?
Tawadkar, who won Canacona with a comfortable margin, had his last laugh in the sensitive Canacona municipal areas where he polled 2759 votes, the highest in one segment.
It may be recalled that BJP, in its efforts to drum up support, romped in the ruling council consisting of 8 of the 12 Councillors, including chairperson Simon Rebello, who all together not only hijacked but led the BJP’s campaign in every corner of the Constituency.
Tawadkar, whose polled votes were assumed as tight fights, became a comfortable win, with a gap of 3051 votes.
On the way to victory, Tawadkar took leads at Shrishthal (1164), Poinguinim(1379), Gaondongrim(1366) Khotigao(849), but trailed behind Congress Bhandari (695)at Agonda with 551 votes and stood at fourth- position with 568 votes behind Independent candidate Isidore Fernandes (955), Bhandari (715)and Vijay Poi Khot (595).
Congress Janardhan Bhandari overall faired better not only in Agonda (695) where he took leading votes, but also made remarkable gains at CMC (1655), Shrishthal (613), Poinguinim (1252), Loliem-Polem (715), however, failed to garner any significant votes at Khotigao (95) and Gaondongrim (197).
It was, however poor and very disappointing show by Ex-Dy Speaker and out-going Canacona MLA Isidore Fernandes as except for his home village Loliem-Polem leading with 955 votes, Fernandes fared poorly at Agonda(545), Municipality(1446), Shrishthal(508), Poinguinim(616), Khotigao(557) and Gaondongrim((1208). Interestingly, with the balance of four Councillors in municipal areas and except for Shrishthal sarpanch and few Panch’s of some panchayats, five sarpanch’s in association with several panch members of Agonda, Poinguinim, Gaondongrim, Khotigao, and his home village Loliem-Polem strongly backing Fernandes had miserably failed to convert sufficient votes for him.
The now infamous Marlim-Tirval (under Cotigao Wildlife Sanctuary) polling booth where electorate mass had boycotted the last Lok Sabha polls, and with Fernandes playing a stellar role in bringing the three layers of developmental works on Road, Water and Electricity also gave just 88 votes to Fernandes and 91(Tawadkar) and distributed rest with 14(Bhandari), Poi Khot (9) besides RG(3), TMC(9), AAP(6) and Pagi (2) Fernandes
On the other hand, 2-time BJP MLA Vijay Poi Khot, first time contesting as Independent, also made an impressive impact by polling 4791 votes, major chunk coming from his native municipality (1292), though his overall predictions were reduced to half in all the seven segments (6 panchayats and 1 municipality).
One of the significant discoveries of this election in Canacona is the vote share polled by Revolutionary Goans Prashant Pagi, who by virtue of his 1599 votes has out-paced TMC’s Mahadev Dessai (1066) and AAP’s Anoop Kudtarkar (835), who failed to cross three-figures.
Interestingly, except for independent candidate Kanay Pagi, all the seven candidates polled votes in all the 59 polling stations of Canacona. Pagi has no votes in 10 of the 59 booths, whereas he has at least one vote in the rest of the 49 booths.
Tawadkar’s highest votes of 395 at Polling Station (no.26) Nuvem-Vaizavadda (Shrishthal panchayat) and at his native ward Amone-Dabel(Poinguinim) 393 and Nanem (Gaondongrim) 313, the only candidate to poll above 300 votes in a single booth, has exhibited Tawadkar’s popularity amongst the ST community which he belongs.