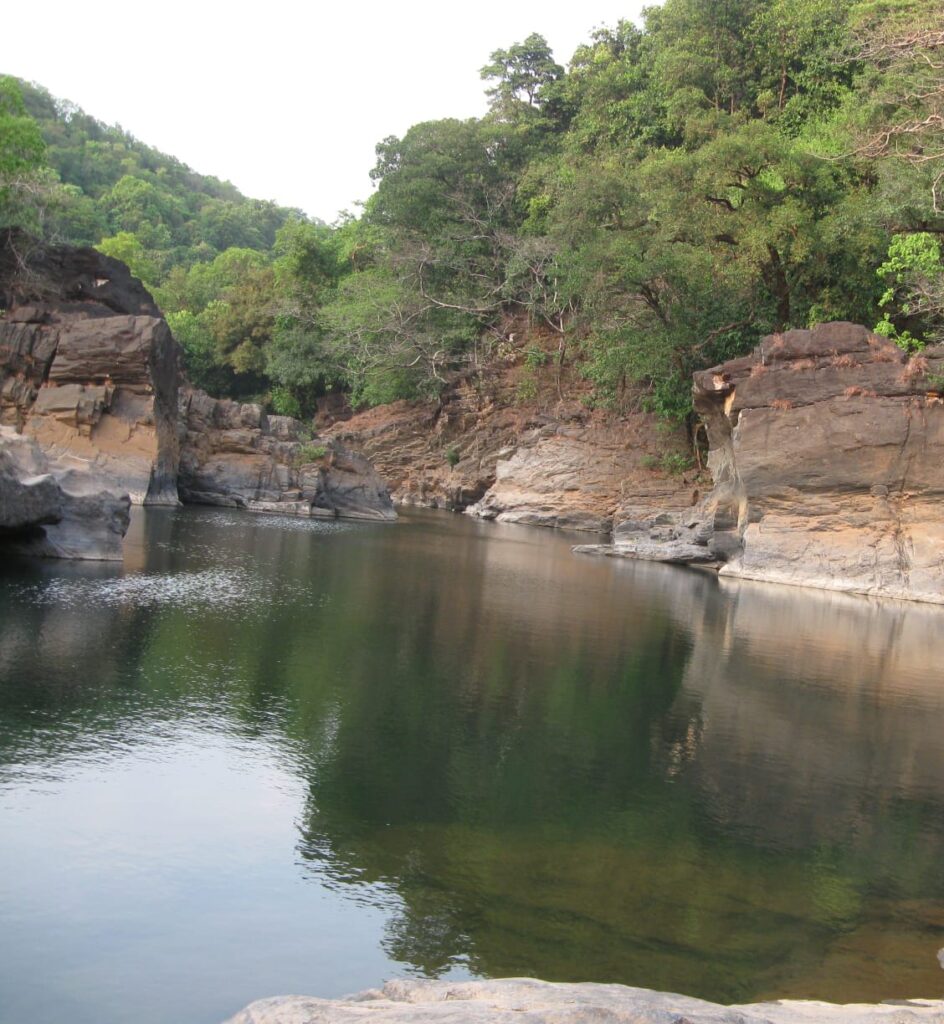 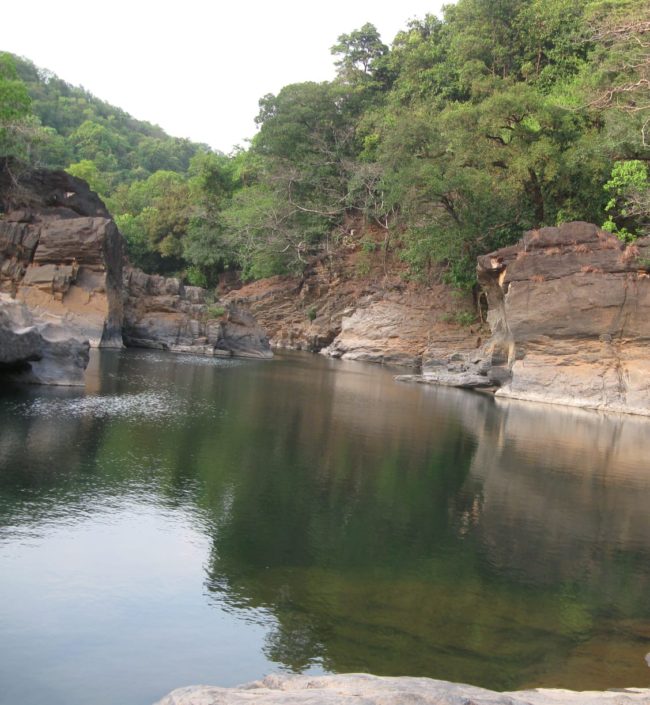 Rajendra Kerkar
KERI: Far away from the human settlement, inside the deep jungle on the border of Goa – Karnataka, there lies very deep, narrow but long valley, from where flows the perennially the lifeline of Goa locally known as the Mhadei- the great mother. It is widely popular in Goa as the Mandovi.

The Mandovi, originating in Degao village of Khanapur in Karnataka after flowing and criss crossing enter the pristine village of Krishnapur where the huge boulders amidst the river exercise check on the flow of water. Here water is little bit appear stagnant. The huge black coloured boulders standing on the either sides of the river on the backdrop of lush green vegetation and trees transform the water body into the canyon.

Locals from Krishnapur and the border villages of Karnataka and Sattari call this area as the Pistyachi kond which mean the water body belonged to Pisto. The holy spirit who is the guardian of this water body command respect among the villagers.

During the hoary past, the traders, merchants in order to go to Halshi, one of the capital cities of Goa Kadamba period were making use of this route passing through the gateway locally known as the Kelghat. This ghat was in use mainly during the late winter and summer and passes through the village Kelil of Khanapur taluka in Karnataka. People were coming from Sankhali to Sonal from where they were crossing river Mhadei at Mhovacho Guno to go to Krishnapur via Bondir of Caranzol. Travellers, merchants passing through the ghat, without fail were expressing their gratitude to the holy spirit by offering incense sticks or betel nuts and betel leaves or coconut.

Villagers in Sattari and Krishnapur have strong belief that the holy spirit ‘Pisto’ comes to their help in time of need by appearing in the ordinary human form with the woollen carpet on the shoulder and wooden stick in the hand and leathered shoes in the legs. There are number of stories regarding the holy spirit.

One such folk tale tells that a folk artist from Karnataka along with the decorated bull as per the tradition was entering Goa through the Kelghat, when he reached to Pistochi kond. He made invocation to the holy spirit that he would remember in the special ritualistic way if he would get ample alms in Goa. In various parts of Goa, he was successful in getting ample alms in the forms of seasonal food grains. Along with the bull laden with bags full of food grains he was returning back to Karnataka. When he reached to Krishnapur’s border he followed another way and stood at a place away from the Pistyachi kond and shouted by beating the drum, “I have successfully cheated Pisto”.

During that juncture, it is said that the place where he was standing had developed huge crack and the person along with the bull and food grains trapped in to the pit and died. After this incident, no one dare to cheat the holy spirit. In the past, there was no shrine but recently one devotee has built small shrine where villagers assemble to pay the respect.

The water body is very deep and full with the rich diversity of indigenous species of fishes and are fully protected. Villagers make use of bio-degradable fish kill and even explosives to kill the fishes. However, no one dare to use it in this canyon. It is mainly due to the holy spirit; this area is protected and considered to be holy. Villagers and travellers passing this way make it a point to wait near the shrine and invoke the deity for blessing without fail. As the forest areas near the Pistyachi kond falling in Goa and Karnataka are part of protected areas, this sacred water body too enjoy protection.

The Pistyachi Kond has been considered sacred water body by the villagers living in the border areas of Krishnapur and Sattari. Though, water in the sacred entity has been treasure trove of fresh water fishes, no one use the fish kill, explosives or chemicals and fishing gears for the fish catch. All forms of aquatic life have been accorded protection.

This year, when we celebrate World Environment Day on the theme Ecosystem Restoration, we have to plan strategy for the protection and conservation of the ecosystems like Pistyachi Kond.